Professor: 'The Pashtuns are not descended from Jews'

What are the origins of the Jews of Bukhara? Do the Pashtun tribes of Afghanistan really have Jewish roots? Dan Shapira, a professor of Jewish studies at Bar Ilan University, enlightens us in Tablet: 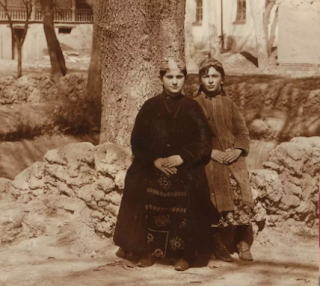 Jewish girls in Samarkand
Nowadays, the Jews of Central Asia are either “Bukharan,” because they are descendants of the former subjects of the Emir of Bukhara, or else they are Ashkenazi Jews who settled there in the Russian Imperial period beginning in the 1860s, with the addition of political deportees in the Soviet period and Polish refugees who were fleeing Hitler.
The Bukharan Jews spoke (and some still speak) the local variety of Persian, being urban folk (the cities used to be Persian-speaking). In the second half of the 20th century, they mostly switched to speaking Russian—similar to the ways that Arabophone Jews switched to French in North Africa and the Levant. A geographical Middle Persian text, edited in the Early Islamic Period, mentions Jews in Khvarazm. A Soviet scholar (Tolstov, 1948) built a far-fetched theory linking those Jews of Khvarazm to the Khazars.
How long have Jews actually lived in Central Asia? It is possible that some Jews were living in the eastern parts of the (former) Achemaenid satrapies by the time the Book of Esther was composed. The Babylonian Talmud, Avodah Zarah 31b, implies that Jews were living in Marw/Marv/Margiana in the fourth century CE. Jewish inscriptions dating from the Sassanid Period have been found in Baryam-Ali near Marw/Marv/Margiana, though Michael Shenkar tends to ascribe them to a later date.
So, the Taliban Are Not Actually Descended From Jews? There are both pre-modern and modern legends about the Jewish origins of Pashtun/Pathan tribes in Afghanistan and Pakistan. Unfortunately for lovers of distant cultural correspondences and romantic myths, these legends are baseless. The Pashtun tribes arrived on the historical scene lately and from nowhere, aspiring to a status similar to that of the Persians; their tribal leaders, who were also poets at the same time, invented for them an Israelite origin. “Persians have literature, courtly culture, and food, we are descendants of the people mentioned in the Qur’an.”
Three stone inscriptions in Early Judeo-Persian were found in Tang-e Azāo in Ḡur Province, Western Afghanistan, Ḡur Province. They were dated 1064 Seleucid Era (752/3 CE). Jews and the Silk Road to China. Two Early Judeo-Persian letters from the eighth century were found on the Silk Road, in Dandān Öilïq in Western China, the first in 1896, and the second, from the ninth century, a decade ago.
As in many other cases of modern languages first recorded in Hebrew characters, Early Modern Persian is first documented in these private Judeo-Persian letters found on the Silk Road. A Jewish community existed in the Chinese capital of Kaifeng under the Northern Song Dynasty (960–1127), to which Jews arrived from the Persian-speaking world, as is evident from the Judeo-Persian rubrics in their prayer books.
Jewish historical stelae in Chinese were erected in Kaifeng in 1489, 1512, and 1663. The Jewish participation in trade through the northern route of the Silk Road was part of the push of multireligious Sogdian merchants and missionaries from Central Asia into China. Sogdian merchants on the Silk Road were divided into several religions—Manicheans, Nestorian Christians, a variety of Zoroastrians, and Buddhists. Dharmaguptaka and Sarvastivada Buddhism seem to have been prevalent in Central Asia and some traces still survive in the Far East. In fact, the name of Bukhara is Sanskrit for “a Buddhist monastery, vihāra.”
Read article in full
Posted by bataween at Sunday, March 14, 2021

Email ThisBlogThis!Share to TwitterShare to FacebookShare to Pinterest
Labels: Jews of Afghanistan, Jews of Iran, Jews of Muslim republics