Pope visits Iraq; but where are the Jews?

(With thanks: Edna, Sami and Gladys)
Update: This report in the Jerusalem Post alleges that the Iraqi government did not pass on the Vatican's invitation for a Jewish delegation to attend the official Papal reception and thus missed an opportunity to highlight the Jewish contribution to Iraq, according to Edwin Shuker, who visits the country frequently.
Pope Francis has made an historic visit to Iraq to give support to the beleaguered Christians and other minorities. The Vatican announced that Jews were invited to a grand interfaith gathering at Ur, but did not attend. No-one bothered to find out why: there are now four identifying Jews in the entire country, the community having been decimated by violence and persecution.  It has fallen to an Iraqi Muslim blogger, Omar Mohammed, to ask the question 'Where are the Jews?' Report in the Algemeiner. 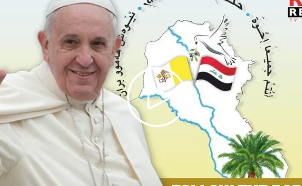 Omar Mohammed — an historian who was an essential chronicler of the occupation through his anonymous website “Mosul Eye” — told The Algemeiner that the visit would be a sign of encouragement to the handful of Christian families still living there.
“The pope — the highest authority in the Catholic Church — will pray inside Mosul; not from Rome praying for them, he will be among them,” said Mohammed, in an interview Thursday. But he also hoped that the papal visit would pressure the Iraqi government to do more to recognize and protect Iraq’s non-Muslim heritage — including its once-thriving Jewish community, which has been all but stamped out.
“When I speak about the constitution of Iraq, there is almost no recognition of the non-Muslim societies,” he said, noting that the country’s laws are founded in Islamic practice. “This is completely against the meaning of diversity and inclusion. How could you possibly want the Yazidis and the Christians to accept to be living under a constitution that doesn’t recognize them?”
Iraq’s second biggest city, Mosul has historically been home to populations of Christians, Jews, Yazidis, Circassians and other communities, in addition to the Sunni majority. After the Islamic State overtook the city in 2014, Mohammed was one of the few able to tell the world about the group’s atrocities, publishing work that was critical for journalists and international organizations.
The Jewish community in Iraq dates back over 2,500 years, and numbered over 150,000 in 1947. Anti-Jewish riots and persecution drove many to flee their homes after the establishment of Israel, with over 120,000 emigrating to the Jewish state in the early 1950s. Mohammed, who now teaches as Sciences Po University in Paris, says he is working on raising awareness about the Jewish community in Mosul, including projects like the translation of an 1837 population registry that included the city’s Jews.
He has called for the Iraqi government to do more to recognize their stories, including by amending the constitution and admitting that persecution had taken place.
“Can the Iraqi government discuss the confiscated properties of the Jews who were deported from Iraq?” he said. “Can we think about just telling them that we acknowledge that this happened to you? This could be a good step if the Iraqi government would say there was also a Holocaust against the Jews in Iraq, not only in Germany.”
On Saturday, Pope Francis will pray at the ancient city of Ur, said to be the birthplace of Abraham and held as a shared symbol of Christianity, Islam, and Judaism. While recognizing the pontiff’s good intentions, Mohammed said that a visit was not enough. “Where are the Jews? They are not here,” he told The Algemeiner. “You are speaking about diversity, but this is not complete, the picture is not complete.” “
Without recognizing the Jewish history of Iraq, without recognizing the Jewish part of Iraq, without recognizing the Jewish contributions to Iraq from thousands of years ago until now … there will be no real diversity or inclusion at all. And this prayer will have no meaning at all,” Mohammed said.
Noting a recent bill in Iraq’s parliament that could criminalize activities related to Jewish culture for fear of stepping toward normalization with Israel, the scholar was not sanguine about the government soon heeding his calls for inclusion.
But he found hope during a recent online event he organized — one that brought Mosuli Jews in conversation with residents living in the city today. “The people now are seeking more information about the Jewish population in Iraq and about their past in Iraq, especially in Mosul,” he said. “I believe the young generation is what makes me optimistic.”
Read article in full
The Canadian Press reports:
Such interfaith forums are a staple of Francis’ international trips. But its sectarian breadth was startling in Iraq: From Shiite and Sunni Muslims to Christians, Yazidis and Zoroastrians and tiny, ancient and esoteric faiths like the Kakai, a sect among ethnic Kurds, Mandaeans and Sabaean Mandaeans. The Vatican said Iraqi Jews were invited to the event but did not attend, without providing further details. Iraq’s ancient Jewish community was decimated in the 20th century by violence and mass emigration fueled by the Arab-Israeli conflict, and only a handful remain.
Read article in full
Overview of the Pope's visit:
Posted by bataween at Sunday, March 07, 2021

So is the Pope ignorant of the fate of Iraqi Jews or playing daft? He is supposed to have a very close Rabbinical friend from South America - he must know - so what game is he playing??

The JPost article seems to indicate that the Pope did want the Jews there, but the Iraqi government prevented any Jews attending.