A new Haggadah for Passover illustrating the diversity  of the Jewish people in pictures has been produced by acclaimed, award-winning photographer Zion Ozeri, himself of Yemenite heritage, together with Sara Wolkenfeld and Josh Feinberg. The Haggadah follows the traditional sequence of the Seder, the Passover meal, but includes a section on Judeo-Arabic. Article in Jewish Journal of LA: 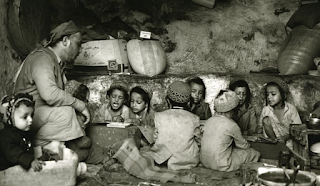 Yemenite Jewish children, 1992, captured by photographer Zion Ozeri
Renowned Jewish photographer Zion Ozeri is no stranger to creating meaningful Haggadot. His award-winning photographs, which capture the world around him, have appeared in The New York Times, Newsweek, The Jerusalem Report, Moment and The Economist, to name a few publications. After reviewing his pieces, Ozeri decided to create a virtual interactive Haggadah that highlights the diversity of Jews, just in time for a second pandemic Passover.
Ozeri, along with Sara Wolkenfeld and Josh Feinberg, curated “Pictures Tell: A Passover Haggadah,” a Haggadah that is completely virtual (can be utilized at home or in a classroom) and celebrates the traditions and cultural experiences of the Jewish Diaspora. Ozeri told the Journal that a major goal of “Pictures Tell” is using imagery to tell the story of the Jewish people.
Read article in full
Link to Pictures tell: a Passover Haggadah
Posted by bataween at Wednesday, March 17, 2021