In the wake of 'normalisation' between Morocco and Israel, JNS News has a useful  overview of the Moroccan-Jewish diaspora by Eliana Rudee, ranging from New York, to Montreal to Israel. The younger generation has developed a strong interest in  their grandparents' culture, but 'normalisation' will not change mattters so much for Israelis with Moroccan roots, who have already been able to visit the country. (With thanks: Imre) 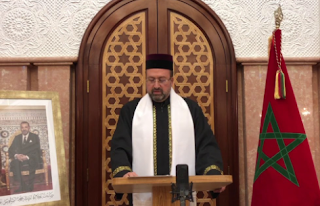 Rabbi Gad Bouskila :very happy
According to Moroccan Jewish leader Rabbi Gad Bouskila of the Orthodox Netivot Israel Synagogue in Brooklyn, N.Y. (the first Moroccan Jewish community in the state), the recent normalization has made the Moroccan Jewish community in North America “very happy” for each of their homelands.
“We visit Morocco often, so this relationship will allow many young Moroccans born in Israel, who were not yet able to travel to Morocco, to see the roots of their grandparents,” he told JNS. The roots of the ancient Moroccan Jewish community date back more than 2,500 years, with many Jews settling in the city of Fez, bringing their economic capabilities that contributed to the “golden age” of Morocco from the ninth to 11th century (a 'golden age' marred by the 1033 massacre of 3,000 Jews in Fez -ed) , when Jews were numerous and powerful in the region.
Following the establishment of modern-day Israel in 1948, many Jews of the 238,000-strong population of French Morocco (in addition to the 15,000 in Spanish Morocco and 12,000 in the international zone of Tangier) were forced to leave. In January 1961, following the death of King Mohammad V, Morocco tightened its restrictions on Jewish immigration, causing nervousness among its Jewish community. Many left for Israel and French-speaking areas in Europe and Canada, and for those who had family there, the United States.
Read article in full
Posted by bataween at Friday, March 05, 2021