With thanks: Raquel
In june 1940, France surrendered to the Nazis and the collaborationist Vichy government took control of the French protectorates in North Africa and the colony of Algeria. It was not long before the regime began to extort money from the local Jews, as the Nazis had done in Germany.
Evidence has appeared on this website that the regime had asked the Jews of Marrakesh to donate money and jewellery to the war effort. Le Petit Marocain of 8 July 1940 has a list of donated jewellery given by Jewish women. Oddly the list also has two Muslim names, perhaps to make it look that the Jews were not being singled out.

To read the Petit Marocain  article click here
A decree or dahir promulgated by the Vichy government had demanded that the Jews of Mogador (Essaouira) declare their assets and property. This was, the Jews feared, so that the government could carry out an inventory of Jewish property and assets as the prelude to confiscation.
The Jewish reaction to this dahir was, according to the civil governor of Mogador in a letter dated 15 April 1942, one of consternation. He accused them of wanting their revenge once the Allies had defeated the Germans. The dahir was greeted with satisfaction by residents of the European quarters (ie the French, some of whom were notorious antisemites.) Interestingly enough, the governor reports that the Muslims were also pleased, as the decree represented 'a victory of them over the Jews.'
The letter includes a breakdown by nationality: while the majority were Moroccan, there were 58 Ashkenazi and even some Palestinian Jews. Most were merchants or traders. 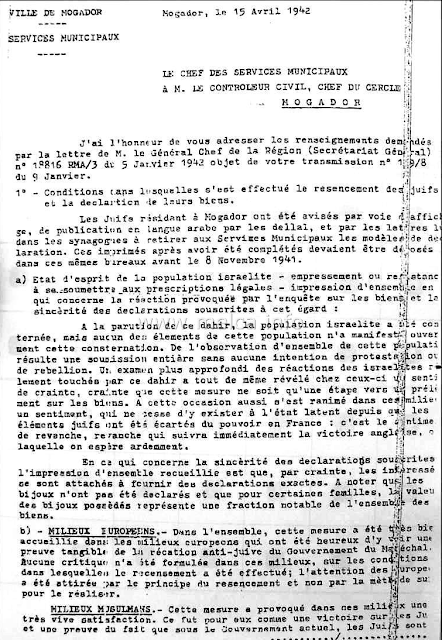 Letter from the local governor of Mogador: 'the Jews sought revenge' 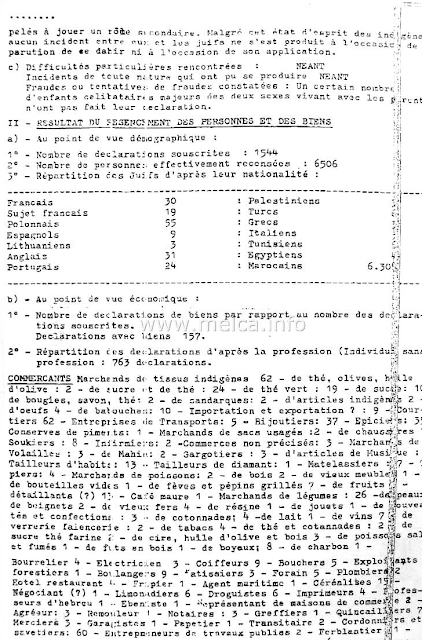