In the islamic republic of Iran, just visiting Israel is a crime. Nourollah Shemian may have been sentenced to 10 years in prison, and he may be sent back there again after his 'temporary' release. Sickening report in The Jerusalem Post: 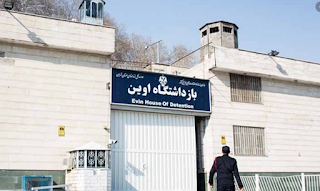 The notorious Evin prison
The Islamic Republic of Iran has temporarily released the 65-year-old Iranian Jew Nourollah Shemian who was imprisoned for allegedly visiting Israel, according to a Tuesday report on the Persian-language website of the Human Rights Activists News Agency (HRANA).
“The temporary release of Nourollah Shemian as the third recently identified Jewish individual put behind bars, is not a cause for celebration. It’s an alarm and likely indication of other Jews behind bars for similar reasons.
Pilgrimage and visiting holy sites is a part of religious practice for many religious groups around the world, but for Iranian Jews it is evidently a cause for punishment and suffering,” Marjan Keypour Greenblatt, an Iranian in exile in the US who is the founder and director of the Alliance for Rights of All Minorities, told The Jerusalem Post.
Read post in full
Posted by bataween at Thursday, March 25, 2021

Email ThisBlogThis!Share to TwitterShare to FacebookShare to Pinterest
Labels: Iran/Israel, Jews of Iran

Pilgrimage and visiting holy sites is a part of religious practice for many religious groups around the world, but for Iranian Jews it is evidently a cause for punishment and suffering,”

Not just for Iranian jews but israeli jews as well. It's illegal for a jew to pray on temple mount, or at Joseph's tomb without prior military approval.