Eli Cohen's body may be returned by Syria

The body of Israel’s most celebrated spy, Eli Cohen, may be exhumed and returned from Syria under a deal mediated by Russia, The Times reports. The report comes soon after the discovery in a Moscow apartment .of rare video film of Cohen.  It was taken by a Soviet signalman stationed in Syria in the 1960s (with thanks: Lily):
The Syrian regime has always refused to hand over the body of Eli Cohen, an Egyptian Jew who spent three years operating under cover as a well-connected Arab businessman. He was finally caught sending secrets back by radio to his handlers from Damascus and was hanged in 1965.
The skill with which he had integrated himself into the highest echelons of Syrian life, plying contacts with alcohol at wild parties as he extracted information, while keeping his wife and children back home in Israel, made him the stuff of legends.
He was played by Sacha Baron Cohen in The Spy, a Netflix dramatisation. Reports in Middle Eastern media say that Syria is preparing to exhume and return his body, part of a long and complex series of talks between the two enemies being managed by Russia.
Some view a series of deals, which have already led to the return of an Israeli woman and the purchase by Israel of the Russian Sputnik-V coronavirus vaccine for Syria, as part of a possible broader rapprochement. Cohen was sent to Argentina from Israel in his persona as a Syrian businessman.
He then used his reputation in the expatriate Syrian community, particularly with the military attaché at the embassy, to establish himself back in Damascus, insinuating himself into top military and political circles. A new head of Syrian intelligence became suspicious and intercepted his messages with the help of Syria’s Soviet allies.
There have been rumours before that the Assad regime might relent and return the body, which is believed to have been buried and reinterred on more than one occasion.
On this occasion the speculation has been accompanied by the release on Russian state television of a documentary on Cohen’s life. It included footage that has not been seen before of him walking along a street in Damascus and also of his execution taken from a rooftop overlooking the public square. The film is said to have been shot by Boris Lukin, a Soviet military signals specialist based in Syria as an “adviser” at the same time that Cohen was operating there. The documentary is being interpreted as a reminder to Israel of the complex three-way relationship between the states. 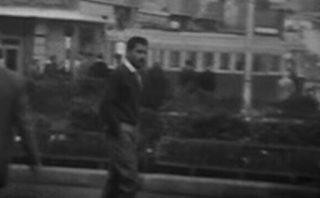 Footage of Eli Cohen walking along a Damascus street appears at 1:09 into the video aired by RT in January 2021. The story of Eli Cohen and how his cover was blown by the Russians, is told. Boris Lukin, a military signalman,  took this rare film at the time using a Super-8 camera. There is footage of Cohen's execution 24 minutes into the video.

Email ThisBlogThis!Share to TwitterShare to FacebookShare to Pinterest
Labels: Israel/Syria, Jews of Egypt, Jews of Syria