A professor of Jewish history at McGill university in Montreal, Chris Silver has become a leading collector of the work of North African Jewish musicians. These musicians openly identified as Jews, and the synagogue and Shabbat table generated a musical style that non-Jewish artists wanted to emulate. Interesting  JTA feature: 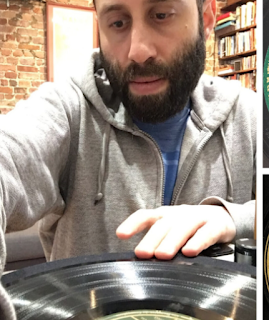 Chris Silver with a shellac record of North African Jewish music
Silver, who is Jewish but grew up in Los Angeles without a strong sense of Jewish identity, went to college at the University of California, Berkeley. There he learned about the history of Jewish North Africa.
After graduating and before he became a collector of records, Silver was traveling in Morocco and contemplating a career in academia. At first, he was most interested in what happened to the musical stars of North Africa after they had left and moved to countries where Arabic was not the dominant language. In one famous example, singer Zohra El Fassia, a cultural icon in Morocco, moved to Israel and was quickly relegated to a remote, dusty corner of the country, with few opportunities to perform, as memorialized in a 1976 poem by Erez Bitton.
With time, Silver grew more curious to learn about the earlier period, the heyday of these artists. And he wondered if there was a richer history to be discovered beyond archival documents of conventional historical research. The musical record provided what he was looking for.
Each album usually indicated not only the name of the performer but sometimes also the composer and lyricist. The name of the record label and the place of pressing were important details. The lyrics and melodies encoded on the shellac told him many stories.
“Here we have a history of North African Jews in their own words in Arabic through the music, which is traditional and popular and everything in between,” Silver said.
He learned to listen for things like shoutouts naming members of the orchestra, or sudden interludes with a musician offering their personal story.
He encountered the cultural seepage of American influences, as evident, for example, in Arabic renditions of the classic “Yes, Sir! That’s my Baby.”
Or, take the music that Tunisian Jewish star Habiba Msika recorded in the late 1920s in Berlin. Faraway from French protectorate authorities, she incorporated subversive messages about her homeland.
“On those records, if you listen to them until the end, she’ll shout out something like ‘Long live Egypt’ or ‘Long live the Independent Levant.’ And then the orchestra erupts into applause,” Silver said.
Msika’s daring artistic production and lifestyle earned widespread attention, including from Pablo Picasso and Coco Chanel, and tragically, from a murderous former romantic partner, who set fire to her apartment, killing her at age 27.
Famous and universally adored, the particular Jewishness of these musicians was not a secret. They openly identified themselves as Jews, and even if not, their dialects and accents gave them away. The first training ground for many Jewish artists was the Shabbat table and the synagogue, which generated a musical style that many non-Jews wanted to emulate, according to Silver.
“There are many stories of Muslim musicians who would position themselves outside of the synagogue on Saturday mornings to learn a new or different melody,” he said.
Read article in full