Who needs hamantaschen when you can eat 'dabla'?

The triangular Hamantaschen, or Haman's ears, have become the universal cookie for Purim. But they were unknown in Tunisia, where the tradition Purim food was dabla (debla), a thin dough dipped in oil and honey. Peggy Cidor recalls how the festival was cellebrated in her childhood in The Jerusalem Post: 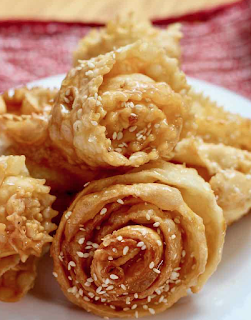 Tunisian dabla (debla), prepared specially to give away to the needy at the festival of Purim. Recipe here.
Each day, upon returning from the French school where I studied and where no one ever mentioned any of the Jewish festivals, I found a new pile of cookies on the buffet table wrapped in cellophane, each more tempting than the next.
Sensing our enthusiasm to taste them, my brother and I were warned not to even touch them. “It’s all for the mimanot,” my mother would say, using an abbreviated term for mishloach manot. Sometimes, my mother would simply call the mimanot “the plates,” but they always meant the same thing – a large dish always taken from our finest china, loaded with samples of the cookies she prepared, wrapped in delicate and colorful paper or one of Mom’s embroidered napkins.
Sometimes, I arrived back from school while my mother was still busy in her kitchen preparing these cookies. I particularly remember the mekrud, made of semolina, dates, tangerines and nuts, baked in the oven and then dipped in homemade honey sugar, tangerine syrup and water.
The dabla were the Oriental counterparts of the Eastern European hamentashen made of a very thin dough cut into long strips and rolled around a special fork, dipped into boiling oil and then honey. And there were more, including almonds mashed and fried in the shape of cigars, and so on. When the day itself arrived, my brother and I changed into our Shabbat outfits, put all the mimanot in large baskets and began our tour to all the aunts and other family in the area.
Needless to say, we returned from our route having received the same amount of mimanot from all of them. Around the table that evening, my parents would dare, here and there, to compare the traditional homemade cookies they had received – always stating their preference for my mother’s.
Read article in full
Posted by bataween at Sunday, February 28, 2021