The brilliant, but short, life of a Hebrew printing press in Fez

For eight years in the 16th century, the Moroccan town of Fez had a Hebrew printing press until it was forced to close down due to a Spanish prohibition on the sale of paper. There would not be another until the late 19th century. Marvin J Heller writes in  Sephardic Horizons (Winter 2021): 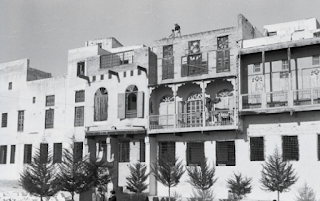 Jewish residence and Jewish history in Fez, in northern Morocco, is both continuous and lengthy. Jewish settlement dates to the early ninth century, continuing to the present day. Although not always positive, since there were periods of extreme oppression, Jewish residence was, more often than not, beneficial to Jews.

Among the little-known aspects of Fez Jewish history is the existence of a brief press that printed as few as seven to nine books, and perhaps even more between c. 1515 to the early 1520s.
Fez was founded in 789 by Idrīs I. It became the capital of the kingdom in 808 under Idrīs II. The latter admitted a significant number of Jews, who settled in the al-Funduk al-Yahūdī quarter. They paid an annual tax of 30,000 dinars.
A positive example of this early Jewish residence in Fez is cited by André N. Chouraqui, quoting Roud el Kartas, who relates that when Idris I assaulted the Jews and Christians in the Maghreb in 789, they were defeated and forced to convert to Islam, despite being ensconced in fortresses. The majority who did not submit were executed.
Nevertheless, even the Idrises’ efforts were limited, for according to Ibn Khaldun, Yahya ibn Yahya ben Mohammed, the last emir of the elder branch of the Idrises, was attracted to a young Jewish girl of Fez. He attempted to seize her while in her bath. The people of Fez revolted, forcing Yahya to take refuge in the Andalusian quarter of the city. Chouraqui concludes that “this episode shows that the townspeople of Fez were concerned for the welfare of their Jews and of their women, and may be accounted for by the strong Berber influence that remained in the town.”
Three subsequent events in Fez stand out in vivid contrast to this anecdote; in ca. 987, a portion of the community was deported to Algeria; in 1035, 6,000 Jews were massacred by fanatics who conquered Fez; and in 1068, the Almoravides sacked the city. A century later, in 1165, a new Almohad monarch instituted changes including forced conversion. Among the victims the dayyan R. Judah ha-Kohen ibn Shushan was burned alive for refusing to submit and Maimonides and his family, who were refugees from Spain, left for Egypt. Another source of affliction for the community was the appearance, in about 1127, of a pseudo-messiah, Moses Dari. Somewhat later, in 1438, the Jews of Fez were required to live in a separate section of the city known as the Mellah in New Fez.
All of this notwithstanding, Chouraqui writes that “these crises were of a passing nature” and Fez was, once again, felt to be a safe city so that Jews could settle there, including, as noted above, Maimonides' family. Indeed, apart from the trials of Jewish life, Fez was also a home to Jewish scholars and scholarship with moments of security and even prosperity. Indeed, Chouraqui notes that it was a “center of Jewish learning.”
Among the early rabbinic figures who resided in Fez are R. Judah ibn Kuraish (9th century), known as the “father of Hebrew grammar,” R. Dunash ben Labrat (mid 10th century), and R. Judah ben David Hayyuj (c. 945–c. 1000), renowned grammarians. Most celebrated of the sages in Fez was R. Isaac ben Jacob Alfasi.9 Among the later sages is R. Jacob Berab (Beirav, c. 1474–1546) and R. Abraham ben Jacob Saba (d. c. 1508). The former was appointed rabbi of Fez at the age of eighteen. He left for the Middle East several years later, where, in Safed he was involved in the attempt to renew semikhah (ordination for a Sanhedrin) for the first time in several hundred years.
The expulsion of the Jews from Spain in 1492 saw large-scale immigration to Morocco. The Fez community increased to number as many as 10,000, comprised of “Spanish exiles” (megorashim) and "natives" (toshavim).11 It was to this community that Portuguese émigrés Samuel ben Isaac Nedivot and his son Isaac came.
As Abraham J. Karp notes, as the presses of the Iberian Peninsula closed and the Italian presses had not yet achieved eminence, there was a need for Hebrew presses. The time appeared propitious for a new press. The Nedivots who had learned the printer’s craft at the press of Eliezer Toledano in Lisbon founded their Hebrew press in Fez in circa 1516, the first in Africa. Indeed, there is a similarity to the works published in both places.The press would publish seven to nine titles between 1516 and 1524, including a Sefer Abudarham, Azharot, Hilkhot Rav Alfas, Tur Yoreh De'ah, and several Talmudic tractates, although the attribution of several of the tractates is in question.
Read article in full
Posted by bataween at Sunday, February 21, 2021

Wow, What a Excellent post. I really found this to much informative. It is what i was searching for. I would like to suggest you that please keep sharing such type of info. Thanks
timing tablets price in pakistan