Sultan of Morocco resisted emancipation of Jews in 1943

With thanks: Duncan
Further to our post reporting that French historians like Georges Bensoussan and Michel Abitbol have debunked the myth that the sultan of Morocco had 'protected' the Jews during World War II, Duncan Lamb has kindly drawn our attention to the official record of the 23 January 1943 meeting between the Grand vizier  of Morocco, representing  the Sultan  and Mr Hopkins, representing President Franklin D Roosevelt.
The Grand Vizir of Morocco presents four questions to Roosevelt: Question 2 seeks assurances on behalf of the sultan that the US will not encourage the emancipation of Jews in Morocco. This question even takes precedence over his request for essential supplies and food. 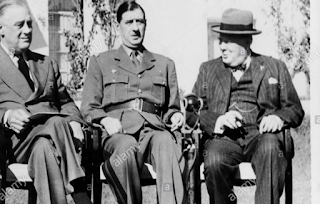 Roosevelt, De Gaulle and Churchill at the Casablanca conference in January 1943
"The Jews have never been the predominant people in Morocco. In numbers and in influence they have always been definitely second. They have been well treated by the Moslems. When the German Armistice Commission arrived in Morocco they at first insisted that the Jews in Morocco should be treated the same as they are in Germany. This the Sultan steadfastly refused to do. The existing situation has been the result of centuries of living together. The Moslems need the Jews and the Jews need the Moslems. There is no Jewish question in Morocco and will be none if matters are left as they are now. Some Jews thought that the arrival of U.S. troops would mean the placing of Jews in positions of authority over the Moslems. This must not be. " (My emphasis -ed)
Jews must therefore know their place and submit to the Muslim majority.  It is clear that the sultan sees his legitimacy as tied to protection of the Jewish minority. The statement that the Jews have never been predominant in Morocco seems to stand in stark contrast to all current efforts by the royal adviser, Andre Azoulay, to magnify the importance of  Jewish heritage and culture in Morocco today.
Read document (Hopkins papers)  in full
An earlier meeting on 17 January between General Noguès, resident-general  of the Vichy regime in Morocco and  President Roosevelt,  confirms Roosevelt's known antisemitism.  As no elections were planned in Algeria, the Jews would be denied 'the privilege' of voting. They would  still be subject to professional quotas in liberated North Africa. 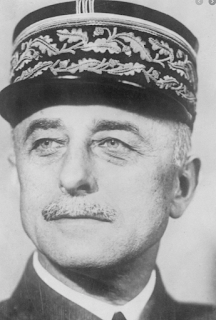 General Noguès
"The matter of political prisoners was then discussed. General Noguès stated that for the most part the Jews had now been released from the concentration camps. It was also stated that the Jews, especially those in Algeria, had raised the point that they wish restored to them at once the right of suffrage. The President stated that the answer to that was very simple, namely, that there just weren’t going to be any elections, so the Jews need not worry about the privilege of voting. Mr. Murphy remarked that the Jews in North Africa were very much disappointed that “the war for liberation” had not immediately resulted in their being given their complete freedom. The President stated that he felt the whole Jewish problem should be studied very carefully and that progress should be definitely planned. In other words, the number of Jews engaged in the practice of the professions (law, medicine, etc.) should be definitely limited to the percentage that the Jewish population in North Africa bears to the whole of the North African population. Such a plan would therefore permit the Jews to engage in the professions, at the same time would not permit them to overcrowd the professions, and would present an unanswerable argument that they were being given their full rights."
Read report  from the Roosevelt Files (McCrea notes) in full
Posted by bataween at Friday, February 12, 2021

Another data point to add that I came across - Patton's "War As I Knew It", his war time diaries. From p19, General Nogues appears right after the Americans land. He brings up the need for peace, but immediately talks about how to keep the peace:

"He then talked about the race antipathies - Jews - existing in Morocco. I told him that I fully understood those things because I had been raised on a large ranch... and as a result of my acquaintance with sheep, I understood perfectly about race antipathies, and therefore I would do nothing about it because I felt that, since the Sultan's ancestors have handled such questions for thirteen hundred years, they were better fitted than I was to continue their management. He said this was completely to his way of thinking and that no racial or tribal troubles would ever stick their heads above the surface.

"... This conversation took about 15 minutes, and the Grand Vizier assured me that my complaisance had given him the happiest 15 minutes of his life."

The obsession with keeping Jews in their place was pathological, I don't know how else to put it.

How obsessive of Nogues and condescending of Patton. Shocking

Dr Rafael Medoff of the Wyman Institute in Philadelphia has written extensively about Roosevelt and his Judeophobia and how it affected the Jews of North Africa after the Allied landings in Morocco and Algeria.

But we were not alone. FDR hated Japanese too, years before WW2. He put a couple of hundred thousand Japanese Americans into concentration camps during WW2, although they were better treated than the Germans and their collaborators treated the Jews in Europe.

Nice post! This is a very nice blog that I will definitively come back to more times this year! Thanks for informative post
Nighty Dress