Ezra Nawi,  who died on 9 January 2021,  was a radical activist in the tradition of the Jewish communists of Iraq. Many of his activities were controversial, if not criminal, such as allegedly denouncing Arab Palestinians for selling land to Jews, which the Palestinian Authority deems an offence punishable by death. Article by Ofer Aderet in Haaretz: 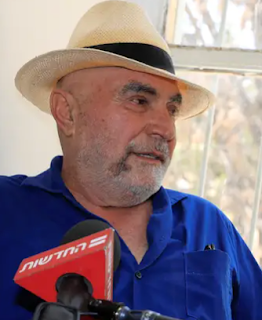 Ezra Nawi: radical Iraqi-Jewish roots (photo: Oliver Fitoussi) Radical left-wing activist Ezra Nawi, who was active in Palestinian causes and was termed a "public enemy" by circles on the right,  has died at the age of 69, just a few months after he was diagnosed with cancer. Nawi, a Jerusalemite by birth and a plumber by profession, viewed himself as a warrior for justice, and had no small share of legal troubles.
He died the height of the trial against him, which followed an investigative report by the "Uvda" television program, which claimed that Nawi handed over information to the Palestinian Authority on Palestinians who sold land to Jews.
According to the program, Nawi believed that the authority would kill them for doing so. Nawi was born in Jerusalem in 1951 to a family that emigrated from Iraq.
As a teenager, he was active in the youth movement of Israel's communist Maki party. His political activism began during the second intifada, during which he joined the Israeli-Palestinian Ta'ayush organization, which aids Palestinians in the West Bank. His activities included defending Palestinians from settler attacks, helping them during the olive and wheat harvest and helping attain legal aid and media coverage.
Read article in full
More about Ezra Nawi
Posted by bataween at Wednesday, February 03, 2021

Nawi publicly boasted that the Palestine Arabs he denounced for selling land to Jews faced torture and death at the hands of the Palestine Authority security forces and legal authorities. Several cases are known where his activities resulted in the disappearance of those he targetted. He was a cruel man with a criminal temperament who revelled in causing pain and suffering to innocents.

Wasnt he a pedofile as well?