Tonight begins the festival of Purim. Youssef Setareh-Shenas hopes that, by tomorrow night, he will have a virtual tour of the tomb of Esther and Mordechai at Hamadan on his website, which aims to preserve the memory of Iranian-Jewish heritage. Karmel Melamed interviewed him for The Forward: 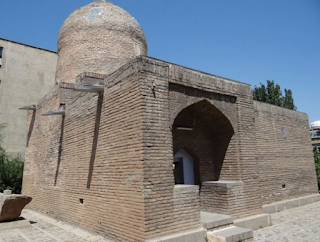 The tomb of Esther and Mordechai in Hamadan

Celebrating Purim is bittersweet for Fariborz Moradzadeh, an Iranian Jewish businessman in Los Angeles.
In the 43 years since arriving in L.A., he has been unable to return to his birth city of Hamedan in Iran and visit the burial site of Purim’s heroine Esther and hero Mordechai located nearby.
The Iranian regime’s random arrests of Iranian Americans and Jews makes such visits all but impossible.
But this Purim Moradzadeh hopes to be able to visit Esther’s tomb virtually through 7dorim.com, a website that is trying to provide a virtual 3-D tour of the Esther and Mordechai mausoleum.
The 3-D tour is still glitchy and the site, in Farsi with some English, difficult to navigate. But those drawbacks don’t dissuade Moradzadeh and others who are proud there’s an online home for Iranian Jewish heritage even if, as they claim, wealthy Iranian Jews aren’t interested in funding it.
The site is the brainchild of Los Angeles Iranian Jewish small businessman Yousef Setareh-Shenas, who nearly 15 years ago created the Persian-language online forum to preserve Iranian Jewish history, culture and information — and which he runs on a shoestring without help from far wealthier members of the community.
“I realized that we as Iran’s Jews are gradually losing our history and heritage because the majority of the community live here in America are unconcerned with the past,” said Setareh-Shenas, who is in his late 60’s.
Read article in full
Hag Purim Sameah!
A video tour of the tombs of Esther and Mordechai in Hamadan, Persia (W/ t Imre)
Posted by bataween at Thursday, February 25, 2021

I simply began in this and I'm becoming more acquainted with it better! Cheers, keep doing awesome!
viagra tablets in pakistan