Update: the Palestinian Community Network on Twitter has voiced its displeasure at the 'erasure' of Arab  American Studies from the final version of the Californian Ethnic Studies Curriculum. It blames 'Zionists'. 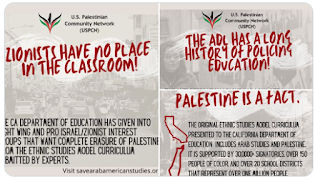 The latest draft of the Californian Ethnic studies schools'  curriculum has largely corrected earlier shortcomings  and  does not justify the criticism it has met in recent days; it has even been disavowed by its original drafters. Sarah Levin of JIMENA  writing in JTA says that the modifications that they and other groups have fought for will allow for minority groups to be explicitly represented, and antisemitism measured against the IHRA definition. Hen Mazzig (below) objects to Jews being used to advance a pollitical agenda:

Sarah Levin writes:
Despite reports to the contrary, the latest draft of California’s Ethnic Studies Model Curriculum does not teach the Boycott, Divestment and Sanctions movement. Students will not be taught the lie that Jews are somehow foreign interlopers in our ancestral homeland. Instead, students will learn that all Jews are indigenous to Israel, they will study the realities of contemporary anti-Semitism, hear about the diversity of Jewish life in America and be exposed — many for the first time — to the stories of Mizrahi and Sephardic Jewish Americans. 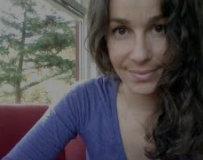 Sarah Levin: lesson plan an achievement
The inclusion in the curriculum of JIMENA’s lesson plan, “Anti-Semitism and Jewish Middle Eastern Americans,” represents an achievement for the Mizrahi and Sephardic community in America. For the first time in U.S. history, Sephardic and Mizrahi Jewish Americans will be explicitly represented in the statewide K-12 curriculum, and California public school students will have the opportunity to learn about our communities and hear our stories.
Los Angeles’s Iranian Jewish community is one of the largest Middle Eastern Diasporic communities in the world, and we are proud that through modifications to the curriculum, students from this community will see themselves reflected in their studies. Our success is also a testament to intercommunity organizing: We and other members of Advocates for Inclusive Middle Eastern Education, an interfaith coalition of MENA minority communities that represents the 60% of California’s MENA population, advocated for an inclusive curriculum that doesn’t overlook the state’s Iranians, Kurds, Assyrians, Bahai, Yezidi and other non-Muslim Middle Eastern minority communities. The new draft curriculum is one that represents and celebrates all Jews, and provides critical resources and contexts to the current struggle against anti-Semitism.
Perhaps most crucial, through JIMENA’s lesson, the Ethic Studies Model Curriculum for the first time canonizes the International Holocaust Remembrance Alliance working definition of anti-Semitism — considered the gold standard by international governments, organizations and much of the Jewish-American community — in K-12 education in the biggest state in the country.
Read article in full
Jews are not a political football, by Hen Mazzig:
Last week, Emily Benedek penned a piece in Tablet that went viral. In her article, she took a hit at Critical Race Theory, another framework to combat racism that was developed by many Black scholars. The impetus for her article was a controversy over the California Ethnic Studies Curriculum. This piece was exploited by many in the Jewish community, using issues about antisemitism in order to discredit the broader movement. What made this particularly appalling was that the legitimate issues with antisemitism had, at the time the article was written, already been addressed and largely corrected. This was never acknowledged since doing so would have undermined the article’s thesis. 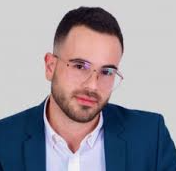 Hen Mazzig: criticism outdated
DePaul Law professor David Schraub had already shown that the information this article relied on was outdated, coming from a 2019 California draft document. “Based on an earlier outcry from Mizrahi and Middle eastern Jewish activists, the California education authorities were both responsive and proactive. The current ESMC draft cites surging rates of hate crimes against Jews, and that we are the most common victims of religious-based hate crimes in southern California. It has an excellent unit focusing on Mizrahi and Middle Eastern Jews — one of the first I’ve seen dedicated to this subject — that specifically characterizes Jews as Indigenous to the Middle East.
It includes passages from a range of Jewish luminaries including Ruth Wisse, Julius Lester, and Angela Buchdahl. It speaks about how, while Jews have found America to be a land of opportunity, especially after World War II, our successes stand side-by-side with the continued reality of antisemitism — especially for Jews who have resisted assimilation into dominant American culture.” So if the curriculum was indeed largely fixed, why did the Tablet article make such noise? Well, because it was not really about the curriculum.
Benedek later explained in a note added to her piece that it didn’t matter that she didn’t mention or speak to any of the Pro-Israel and Jewish organizations who worked for years to include Jews in the curriculum. She wrote, “the reason I felt no need to praise these tweaks is that they are peripheral to the problem.”
University System’s decision to make an about-face on a major ethnocultural issue is anything but a tweak. But Benedek was dismissive for a very good reason. She wasn’t concerned about antisemitism at all. For her, antisemitism was a dollar store sock puppet behind which she could hide her true agenda. Her agenda is to overturn ethnic studies, to obliterate Critical Race Theory. If tossing the Jewish football kept her in the game, so be it.
Read article in full
Useful summary by Ben Sales in Times of Israel
More articles about Californian school curriculum
Posted by bataween at Saturday, February 06, 2021

There is an enormous difference between opposing Critical Race Theory and opposing teaching about ethnic minorities and the problems and injustices that they have suffered. Critical Race Theory is a particular view of these problems that is extremely problematic in terms both of its empirical basis and its ethical implications. Moreover, it is an outgrowth of the theories variously known as "deconstruction", "postmodernism", and "poststructuralism", which are fundamentally unsound and considered nonsensical by virtually all scholars in the natural sciences and the more serious social sciences and humanities. They infest literary theory and much of cultural anthropology.