Jews in six Gulf states have formed a new association to coordinate their religious needs. Seth Frantzman reports in the Jerusalem Post: 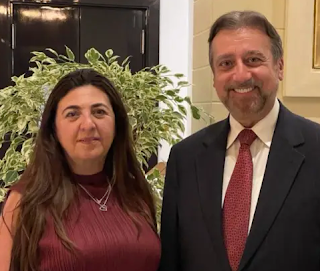 Houda Nonoo, former Bahrain Ambassador to the US, and Rabbi Elie Abadie, senior rabbi in the UAE.
As Jewish life has become more public in Bahrain and the United Arab Emirates, Jews from across the Gulf are forming the Association of Gulf Jewish Communities. The new organization, the first of its kind, will include Jews and their communities from the UAE, Bahrain, Oman, Qatar, Kuwait and Saudi Arabia, according to a statement Sunday morning.
“During the pandemic, many of us started attending the Jewish Council of the Emirates’ pre-Shabbat Zooms where we met each other. That ultimately became the genesis for the creation of the Association of Gulf Jewish Communities because as we got to know one another on the call, we realized that there were certain resources we could share,” said Ambassador Houda Nonoo from Bahrain. Nonoo previously served as the kingdom's ambassador to the United States.
Read article in full
Posted by bataween at Monday, February 15, 2021

Email ThisBlogThis!Share to TwitterShare to FacebookShare to Pinterest
Labels: Jews of Dubai and Gulf states, Jews of Bahrain