Update: The photo appears in a version colourised by Josh Korn of Ottawa. Josh has also added the names of each of the family members.
It is perhaps the photo  most associated with the exodus of Jews from Arab countries:  having being reproduced dozens of times, the Yemenite family group photo will soon be turned into a sculpture on the Haas promenade in Jerusalem. Now Avichai Cohen, the 37-year-old grandson of the family, has,  for readers of Point of No Return, identified each one of the individuals in the photo and  expressed what aspirations they symbolise for him. It would indeed be fitting if the surviving members were invited to the inauguration. 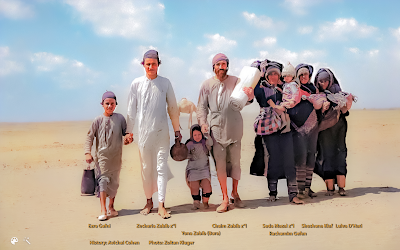 The Zebib family from Yemen: the iconic photo has been colorised by Josh Korn
"I am very excited to see the photo of my mother’s family, the Zvivs, making Aliyah on foot from Yemen in 1948. It is being seen by so many in so many places – magazines, newspapers, books about the Aliyah of Jews from Arab countries, even at an exhibit at the airport, and now, through this sculpture which will be placed in Jerusalem at the Haas Promenade.
The photo is of my grandfather, Mori Chaim Zviv, who is carrying the Torah. It was taken, apparently, by a British soldier at the Hashd Camp, where the Yemenite Jews stopped en route to Israel. During the life of my grandfather, now in his 90s, this photo was published in books about Aliyah, such as “Amud Ha'esh” (“Pillar of Fire.”) It became an icon of Zionism, a realization of its dream and its optimism, showing the passion and dedication of the Yemenite Jews to living in Israel.
Because of this, it is important to me to honor my grandfather, Chaim Zviv, who brought his family through great difficulties and a strong spirit to Israel in order to realize the story of our heritage through many generations, and to respect the people in the photos who are still alive. I aim to tell the authentic experiences, or witness through these icons the memory, similar to the well-known photo of the Paratroopers at the Kotel in 1967, who are remembered during that event and afterwards. I want to share their stories, and to give credit where due to these images in the photo. 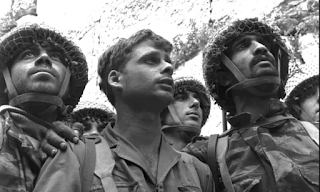 IDF paratroopers at the Kotel in 1967
The names of the people in the photo, from left to right: Ezra Gafni (Zviv), my uncle, who today lives in Binyamina,  Zecharia Zviv, z”l, my uncle, who lived in Kfar Saba, whose children can share his story. The girl in the photo is my aunt Yona Zviv (Bura) who today lives in Petach Tikva. My grandfather, Chaim, z’l, who is holding the Torah and lived in Binyamina. Grandmother Sada (Mazal), z”l,  is holding baby Rachamim Gefen (Zviv) who lives in Haifa. The women onthe far left are my mother’s sister, Shoshana Klaf (Evron) and their mother Lulva D’Hari (my great grandmother.)
This photograph enriches and accompanies me personally throughout my 37 years of life. The photo is powerful, and important to me and my family. If it is also an icon for others, since it represents the story of the nation of Israel altogether in some way. I will be happy to respond to requests about the photo, or the people in it. I also think it would be fitting and desirable to invite these people, who became icons of the Aliyah from Arab countries, to the dedication ceremony of the statue. With blessings and great excitement, Avichai Cohen, grandson, and all the generations of the Zviv family."
Posted by bataween at Tuesday, February 02, 2021