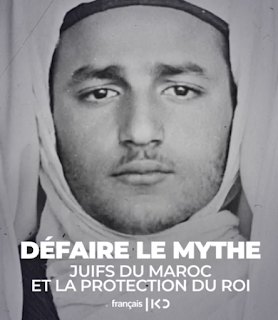 Did the wartime sultan of Morocco protect the Jews? For some years now historians have been gnawing away at the myth that the sultan prevented the deportation of the Jews to death camps and even wore the yellow star.

French historian Georges Bensoussan, speaking on the Israel (French) channel Kan. affirmed that the King may have shown his sympathy for Jews in private, but he signed every single anti-Jewish dahir promulgated by the pro-Nazi Vichy regime in 1940/1.  Deportation was never on the cards. The yellow star was never mandated in Morocco and only in Sfax in Tunisia.

In fact Bensoussan says that the Bey of Tunisia was more liberal towards his Jews than the sultan of Morocco, who made sure that Jews were banned from employing young Muslim girls as maids.

The historian Michel Abitbol says that the sultan had no choice but to comply with the anti-Jewish decrees, or risk being deposed. The decrees mainly concerned the relations of Jews with the French administration (dismissal of Jewish officials, expulsion of Jewish children from French schools and  property inventories) . The order  forcing Jews settled outside the Mellahs of major cities back into Mellah, the ban on the practice of certain liberal professions or any press or cinema-related profession concerned a limited number of Jewish people and were generally not applied.

So how did the myth arise? When the future Mohamed V met Roosevelt and Churchill in January1943, Roosevelt promised to work for Moroccan independence. According to Bensoussan, because he believed that the Jewish lobby controlled US foreign policy, the sultan  made protecting the Jews a badge of his authority. According to Abitbol, the sultan was then free to express his support for all his subjects. The myth has been spread by Moroccan Jews themselves when faced with the hardships of resettling in Israel, where most of them went.

Was the king of Morocco a Righteous Gentile?

Posted by bataween at Wednesday, February 10, 2021

I've also had some interest in understanding the particulars of the Sultan's view of the Jews at this particular time. One is the from the US archives, where 4 questions were asked of the US President by the Sultan. Question #2 is a request for an assurance the Jews will not be emancipated, nor ever put in a position over a Muslim. This was asked ahead of a request for food, clothing, and machinery for the people. Here is the memo:


Also, several books now clarify that the Sultan's insistence on treating Jews as Muslims revolved around his concern that his legitimacy revolved around his ability to lead and protect Muslims. The German definition of a Jew would put Jewish converts to Islam in danger, a violation of the Sultan's mandate. "Making Morocco: Colonial Intervention and the Politics of Identity" explains this quite well, supported by the treatment of Jews after this declaration.

That is most interesting, Duncan - I would like to post question 2 in a separate post. As you say, the subjugation of the Jews is more important than food etc. To persecute Jewish converts to Islam because of their race would have been a violation of the sultan's duties as protector of the faithful.

I can't wait to see it. There are a few gems in the archive, such as this one:


"General Noguès stated that for the most part the Jews had now been released from the concentration camps. It was also stated that the Jews, especially those in Algeria, had raised the point that they wish restored to them at once the right of suffrage. The President stated that the answer to that was very simple, namely, that there just weren’t going to be any elections, so the Jews need not worry about the privilege of voting."