In an effort to gain closure for the Yemenite Children Affair,  the Israeli government has approved a plan to compensate some 1,000 families whose children had disappeared following their arrival in Israel some 70 years ago.  The government has expressed regret for the families' suffering, but has stopped short of an apology. The Times of Israel reports (with thanks: Sarah, Stan): 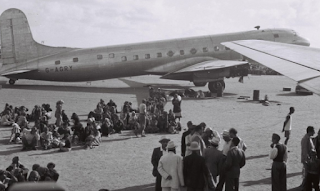 Jews from Aden and Yemen awaiting their airlift to Israel in 1949
Under the terms of the plan, families will receive NIS 150,000 ($46,000) for each child whose death was made known to them at the time. A sum of NIS 200,000 ($61,000) will be paid for each child whose fate is unknown. In total, the government will allocate NIS 162 million ($46,600,000) for the compensation plan.
Only families whose cases were already reviewed by one of the three state committees set up over the years to investigate the issue will be eligible to apply for compensation. Requests must be filed between June 1, 2021, and November 30, 2021.
A committee will be established to oversee distribution of the compensation money. There are 1,050 families that qualify for compensation, according to the Ynet website. Receiving compensation will be dependent on a written commitment to not file any further lawsuits on the matter as well as to close and waive any existing legal action.
The proposal included a declaration that “the government of Israel regrets the events that happened in the early days of the state and recognizes the suffering of families whose children were part of this painful issue.”
“It is not in the power of a financial plan to provide a remedy to the suffering caused to families,” the declaration noted.
“However, the State of Israel hopes that it will be able to assist in the process of rehabilitation and healing of the social wound that this affair has created in Israeli society.” The compensation plan came against the background of several lawsuits by families regarding the matter.
Read article in full
More about the Yemenite Children Affair
Posted by bataween at Tuesday, February 23, 2021

I remember a comment made on this blog a few years ago saying that the disappearance reports were greatly exaggerated and that there has been a thorough investigation by 3 commissions and that there are only about 50 odd (sic.) were involved ( I suppose that makes it alright!!!).
I am not sure whether the compensation is adequate and it is not ethical not to issue an apology and even declare who fostered the children. No doubt this is a disgraceful episode in the Ashkenazi establishment and the state of Israel.

I remember Emile you saying that this blog has ignored the issue. The figures are correct, of 1000 cases only about 60 are not accounted for. The vast majority of children had died - the mortality rate was 50 percent for Yemenites. There have indeed been three Commissions of inquiry but none found that the authorities ran an adoption racket, and that is why the government feels it does not have to apologise for roque doctors and nurses. The compensation will never be adequate but is an attempt to heal the wounds.

The 3 gov't commissions had no teeth. There are about 6500 missing Yemenite & Mizrahi & Balkan kids, not "50." About two years ago, we attended a lecture by famous radio personality Ya'el Tzadoq at the (Menachem) Begin Center in Jerusalem. It was standing room only, & there was great anger in the audience for the whitewashing of the kidnapping of these children. The most haunting evidence was of a man in Haifa who had some type of position at the docks of the port & for some reason returned after normal hours only to see a lot of light, in the middle of the night, as ambulances & nurses drove up & delivered infants to waiting Zim ships. He was confronted by a fellow employee who told him if he'd breathe a word to anyone about this, he'd never work again! However, he did tell his CHILDREN about the episode because it ate away at his conscience his whole life & they were there to testify. I don't know what the mortality rate for Yemenites was, but that has ZERO to do with graves of Yemenite children that were dug up & found to be empty. Ashkenazi Holocaust survivors were traumatized & were dying like flies at the same time, yet nothing similar happened to them. I personally have two female cousins who doctors said had died, but refused to return their bodies or show us a grave. My brother in-law was also kidnapped, but my father in-law, obm, was unusual in that he was not gullible like most of the Yemenite Jews. He went to Qibbutz 'Ein Shemen & went from place to place calling his son's name until he found him. He'd seen a TRUCK full of Yemenite kids while at the qibbutz. When was the last time you heard about a truck full of Jewish kids being separated from their parents? I once asked him why they didn't try to get the other kids there & he responded that they didn't think it was an organized, systematic kidnapping. They thought it was just some sort of Israeli fashla. Never forget Tzila Levine, a kidnapped Yemenite woman who left Israel from her northern qibbutz. She submitted her DNA to Ramat Gan attorney Ran Tzuberi & he found her match with her mother Marghalith Omessi. The country went into shock, but quickly went into damage control mode by having a DIFFERENT doctor VIOLATE patient privacy & announce they'd (ILLEGALLY) taken Tzila's DNA & run a DIFFERENT test & found that she was UNRELATED to Omessi! It turns out that the 2nd test was a far less accurate type of test, but, of course, most people would never do due diligence to find that out. There's much, MUCH more online. This was a coordinated effort that went beyond just the Labour (Ma'arakh) Party & included, according to speakers at a demonstration in a Jerusalem park in the 1990's former president Navon, Yosef Burg, Miriam Ben-Porath. Rav Porush was one of the speakers & they asked when he publicize the other names, but he was afraid. These evil people never DREAMED that DNA would be a possibility!

What you say is very upsetting but if all these kids were shipped off to America in substantial numbers, why haven't more come forward? You say you did not know the mortality rate. This is a crucial factor. Do not underestimate the state of the children when they arrived from Yemen, half starved and sick. It is indisputable that many did die.
It is one thing to say that there was trafficking in children but it is another to implicate the government and so far there does not seem to be evidence of this.

I don’t usually read blog posts, but I’d like to think this write-up really forced me to try and do it! Your writing style took me by surprise. Thanks, good post, really nice.
timing tablets