This is the amazing story, told by Ruth Corman in her blog, of how Amnon Damti, born profoundly the deaf son of Yemenite parents, became an award-winning Israeli dancer with his wife Jill. They danced for the US president, deaf and disabled children and prisoners, devising a new 'Damti Method' to bring out the best in them. But Amnon's childhood was scarred by the disappearance of a sister, and he grew up in her shadow. 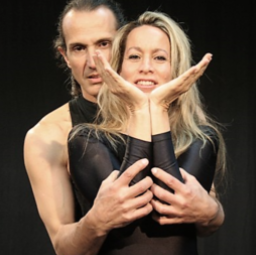 Amnon and Jill Damti
His mother Shulamit, born in the mid 1920’s in Yemen, was given in marriage to a divorcé when she was aged 10. Her new husband, all credit to him, was patient, waiting until she was ‘mature’ (12) before the marriage was consummated.
Her first son was born when she was 14 or 15 – she never knew her real age, and she later had three more boys. In 1947 the family emigrated to Israel with their four sons, three of whom, including Amnon, the youngest – were deaf.
The family had trekked across Yemen, encountering many hardships en route until eventually reaching a place where airplanes were waiting to fly them to the Holy Land as if ’on the wings of eagles’. On arrival they lived in a tented camp. Life was hard, but Israel represented a safe haven for Shulamit and her family, far from the dangers they had experienced in Yemen. She had brought some jewellery with her, made by her artisan grandfather. Unfortunately, this was stolen, but compared to the subsequent ‘theft’ she suffered, the loss of the jewellery was insignificant.
After two years she gave birth to a long awaited daughter, Miriam. When the baby was almost a year, Shulamit, having insufficient milk to breast feed and was advised to visit the doctor for stamps to receive extra food.
She had heard stories about Yemenite babies being taken away from their parents so was nervous about going, even more so when, at the surgery, the doctor told her that she was young and beautiful and could easily have more children. He continued”Your daughter is very ill, and must go to hospital.”
Shulamit replied saying “I may be primitive, but my daughter had neither fever nor cough, however she could not argue with the doctor. They were immediately taken by taxi to a hospital where a waiting nurse took the baby from her arms – it was the last time she ever saw her.
Returning to the surgery she discovered that the ‘doctor’ had disappeared. Shulamit desperately searched for a year but could find no trace of Miriam.
Even when she was 90 years old she said there was not a single night that she did not cry herself to sleep and never once stopped looking for her baby.
When Amnon was young his mother left his hair long and in pigtails. On one occasion there was a fancy dress party for the Jewish festival of Purim. He wanted to be a cowboy or a soldier but his mother insisted on dressing him as a girl, telling him how beautiful he looked.
He never knew the story about his sister until his brothers told him several years later, but his mother never spoke of it until many years later when Jill was making a film on this subject.
Amnon began slowly to realise why, despite his being loved by his mother, he somehow felt as though he was living as a mere shadow of the sister he never knew, whilst Shulamit spent her whole live looking endlessly for her missing daughter. Despite years of searching no trace was ever found.
Read article in full
Jill and Amnon Damti dancing 'Between two worlds'
More about the Yemenite baby affair
Posted by bataween at Thursday, February 11, 2021

Google home is a device that is used as a speaker developed by Google. Google Home devices are designed to follow the voice commands of the users. many users have reported that they are facing the issue “google home not responding” when they are trying to accessing it through their voice. This issue has occurred due to many reasons, and some reasons are as follows: bad internet connection, outdated google home app, and incorrect location. If you are suffering from this issue, then you are visited at the right place. Here we have provided you the possible solutions to fix this issue. whenever, If you still face any issue then, you can call at Google Telefoonnummer through to talk to our experts.

I've gained informative new things, thanks sharing this and enhancing my knowledge,our web log isn’t only useful but it is additionally really creative too.
Nighty