California school curriculum is 'a house on rotting foundations'

A battle has been raging for several years over the model curriculum for Ethnic Studies taught in schools in California. The state Board of Education will finally vote on the curriculum on 17 March.  JIMENA has been among those groups actively pushing for the curriculum  to include Mizrahi Jews. But Emily Benedek, writing in Tablet, argues that their focus has been akin to painting a house standing on rotting foundations. Those foundations are 'Critical Race Theory', which sees Jews as 'privileged, powerful and white' and cannot admit discrimination by 'people of colour', a category which emphatically does not admit Jews. 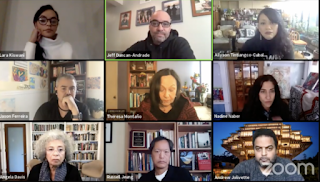 Participants in a Zoom meeting decrying cuts to Arab studies  from the current draft of the schools curriculum
Tammi Rossman-Benjamin, director of AMCHA Initiative, which fights campus anti-Semitism, points out that all 13 founding members of the Critical Ethnic Studies Association (CESA) are BDS activists. CESA, the national home base for critical studies, passed a resolution to boycott all Israeli academic institutions in 2014, and the group’s past four biennial meetings included multiple sessions demonizing Israel. “There are a couple thousand academic boycotters of Israel in the country,” she said, “and the largest percentage of them come from ethnic studies. Anti-Zionism is built into the theory and the discipline of ethnic studies, which demonizes Israel as an apartheid settler-colonialist Nazi state.”
But of even greater concern to Jews, she believes, is the singling out of Jewish students as enjoying racial privilege. “I don’t see any way that Jewish students can sit in an ethnic studies class and not feel they have a double target on their backs,” she said, fearing hatred and violence will ensue. First, because they’re Jewish, and considered white and part of the 1%, the purported villains of the teaching, and then through an assumed association with Israel. “There’s a state requirement that you have to sit through a class that says to Jewish students they have extraordinary racial privilege and yet forbids them from speaking because ‘this course is not about you?’ If you don’t accept it, you’re publicly shamed and ostracized—you can’t even speak up and say, ‘I’m not sure if I think that all white people are racists.’” To placate critics, the third version has added lessons about Korean Americans, Armenian Americans, and Sikhs. Two lessons have been offered about Jews. One, following crude CRT dogma, teaches that Mizrahi Jews coming to the United States from Arab lands were mistreated by “white” Ashkenazim. The other suggests that Jews of European descent have white privilege.
The Jewish Journal points out that Jews are the only group in the curriculum for whom the term “privilege” is used. And this privilege is not earned by way of talent, or educational and professional attainment, but rather trickery. The ESMC, echoing Nazi propaganda about Jews as impostors and appropriators hiding in plain sight, points out that American Jews often change their names (“this practice of name-changing continues to the present day”) to change their rank in the social hierarchy. The historical reality of repeated genocidal attacks on Jews because of their perceived or imagined privilege is not offered as counterpoint, because ethnic studies teachers assume the Holocaust is taught in world history class. But next year in San Mateo County, world history will be replaced by ethnic studies. Lia Rensin, who has two children in public schools in the Bay Area, said the students already have no time. “I think I probably feel the way most parents feel—there are already a gazillion requirements. My daughter took two semesters this summer of online Spanish, so she could take art next fall in school. Now you’re thinking of adding yet another requirement?”
Meantime, Rossman-Benjamin said the ESMC creators are trying to reestablish their influence: “The people who wrote the first curriculum who are still very well connected are going school board by school board and getting them to agree to implement the discredited first draft.” In fact, school districts are free to follow any curriculum they want. There is no requirement to use the model curriculum.
Emily Benedek adds this note: It is true that StandWithUs, JCRC-SF, AJC, ADL, JIMENA , JPAC, the California Legislative Jewish Caucus, and Progressive Zionists of California all labored in their own fashion over the past two years to make this curriculum less terrible for Jews and for racial comity in America. They eliminated hateful and offensive material that should never have been there to begin with, and successfully lobbied to include a lesson on Mizrahi Jews, which includes a truncated version of the IHRA definition of anti-Semitism.
They see these as major victories. But I do not.
The reason I felt no need to praise these tweaks is that they are peripheral to the problem. The exclusion of Jews from the original ESMC, which was what the various organizations spent their energies on, was offensive. But focusing on that is akin to painting a house that is rotted from the foundation. The critical race theory framework is what is dangerous, and, as I tried to show with my reporting, it is fundamental to every single draft that's so far been produced.
Read article in full

Point of No Return adds:
Meanwhile, the far-left publication Jewish Currents criticises JIMENA's lesson plan, which aims to introduce students to antisemitism through the lens of Jewish Middle Eastern Americans, as well as their 'intersectional identities' 'for containing few examples' aside from antisemitism. It even quotes a 'Mizrahi activist' who objects to the fact the plan does not mention Islamophobia or anti-Arab racism! This charge is only credible if Mizrahi Jews are viewed as ' Jewish Arabs', a concept fashionable on the anti-Zionist left.
Jewish Currents also cites Devin Naar, associate professor of Sephardi Studies at Washington University, who criticises the lesson plan for evading the question of 'extensive prejudice' Sephardim  have faced in the United States from other, normative, white Ashkenazi Jews and Jewish institutions'. While this is a fair point and reflects the bias of the majority- Ashkenazi community, Jewish Currents fails to appreciate the full extent of antisemitic discrimination experienced in Arab and Muslim countries which caused Mizrahi Jews to move to the US in the first place. This is because 'critical race theory'  sees Arabs  and Muslims only as powerless victims of white power structures.
Jew-hatred is forced on the kids of California by Dominic Green (Jewish Chronicle - with thanks: Lily)
Why California's third ethnic studies draft is offensive and racist by Dani Ishai Behan (Times of Israel)
Past articles on California Schools Ethnic Studies curriculum
Posted by bataween at Friday, February 05, 2021

OK, but I think it's necessary to add a major caveat. The initial version of this Ethnic Studies curriculum does seem to have been awful. But credible analysts who (unlike me) are closely familiar with this matter have convinced me that the final version of he curriculum has been extensively revised and greatly improved--due, to no small degree, precisely to the efforts of JIMENA and other groups critical of the initial version. In fact, the final version of this Ethnic Studies curriculum has been improved so much that the authors and advisers who put together the initial version of the curricumum (some of whose photos appear at the beginning of this post) have publicly declared that they now want to dissociate themselves from this whole initiative.

So that Tablet article is misleading.