Tunisian president Kaïs Saïed has apologised for blaming Jews for instability in Tunisia after his remarks were picked up by Rabbi Pinchas Goldschmidt of the European Jewish Congress and reported in The Jerusalem Post. Although his supporters have said that his words were misunderstood, Saïed has form, repeating a spurious distinction between Jews and Zionists he made in March 2020. (With thanks:Lily) 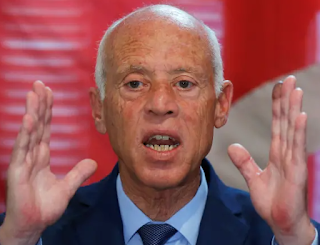 Kaïs Saïed
The president of Tunisia called up the chief rabbi of Djerba, Rabbi Haim Bitan, and apologized for his diatribe against the Jews, faulting them for unrest in the country,” Goldschmidt tweeted.
Saïed seemed to refer to “the Jews who are stealing” while discussing the political situation with Tunisian citizens, as heard in a video posted to his Facebook page on Tuesday.
However, others have said that Saïed did not refer to Jews at all, and said “those who are sitting around stealing” in Tunisian dialect.
Read article in full
Posted by bataween at Thursday, January 21, 2021