The term 'Arab Jew' is an act of colonisation

Anti-Zionists have manipulated the Mizrahi story for the sole purpose of demonizing the Jewish state. UC Berkeley’s Bears for Palestine is the latest group to join this trend, as part of their Palestine 101 curriculum. (What is more worrying, is the trend has also been seeping into the mainstream academic curriculum - ed. ) Maya Reuven writes in Jewish Journal: 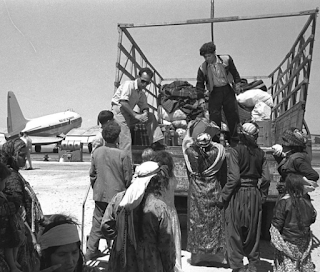 Jewish refugees arriving in Israel
Although much of the curriculum plays on routine anti-Zionist arguments and tropes, Bears for Palestine’s lesson materials for week five (“The Character of the Zionist Settler-State”) take a more creative approach to demonizing Israel by including an article by Ella Shohat titled, “Sephardim in Israel: Zionism from the Standpoint of Its Jewish Victims.”
The article proceeds to tell a story of “Arab Jews,” a majority of whom now seek to form a “Palestinian-Sephardi alliance” in order to combat the evils of Zionism. The article attempts to make an argument about settler-colonialism while indulging colonialist language. In the piece, Shohat routinely refers to Mizrahim as “Arab Jews” or even “Jewish Arabs,” terms that are themselves a product of Arab imperialism.
Mizrahi Jews had been living in the Middle East long before the Arabization of the region, and pushing the use of the term “Arab Jew” over our preferred indigenous title is itself an act of colonization. As a result, a vast majority of Mizrahim today reject the term “Arab Jew” in favor of “Mizrahi Jew.” The irony of using this language of erasure for a unit entitled “The Character of the Zionist Settler-State” cannot be understated. Shohat also dodges the topic of the Jewish exodus from Arab lands in favor of a narrative that paints Israel, the place of refuge, as the ultimate oppressor.
If we wish to have an honest discussion about the oppression of Mizrahi Jews, should we not begin with the Farhud in Iraq? The internment of Jews in Egypt? Nazi-inspired concentration camps in Libya? To gloss over all of these atrocities in favor of an argument that demonizes the country that gave my family and the families of the 850,000 refugees a future is disingenuous at best.
But it is Shohat’s suggestion that there is a “Palestinian-Sephardi alliance” against the existence of Israel that is indicative of just how disconnected from reality and incredibly manipulative the article is. The mainstream Mizrahi perspective is a Zionist one.
Read article in full
More about 'Arab Jew'
More articles
Posted by bataween at Thursday, January 07, 2021

1) Regarding ella shochat and her kind - whether sephardi, mizrahi, or ashkenazi - I don't know of any other people in the world that has as many self-haters as we do. that just goes to show how utterly pathetic Jews, especially zionist jews, are. (And yes, when shochat speaks, she sounds like a zionist to me.)

2) calling mizrahi jews "arab jews" is certainly a very colonialist, not to mention, racist, term. But so is calling the countries that they came from "Arab countries". they're not Arab countries. they are arab-occupied countries. Just as using the term "Arab Jew" either negates or minimizes the "Jew" part, calling these countries "Arab" countries either negates or minimizes the indigenous populations (which sounds kind of racist to me).

Shohat is most certainly anti-Zionist


Mizrahi was a word originally used for Jews from Eastern Europe by the German Ashkenazim, it was then used by the Saknut in the 50s for Jews from North Africa and the Middle East
There is nothing wrong with word Arab its a fact they whole middle East has been Islamic for 1400 years, so yes Arab Jews Arab Christian and Moslem Arabs, they are not Arab occupied lands

The Arab nationalism created mainly by Arab Christians which first arose in the late 19th century and which was a determining factor in shaping the Arab identity during most of the the 20th century (including the so-called anti-colonialist movements that sprang up throughout the Arab lands) only included Muslims and Christians and expressly excluded Jews, who were never regarded as Arabs by their fellow Muslim and Christian citizens. It is therefore a lie and a travesty to call the Jews from Arab lands "Arab Jews" or "Jewish Arabs". Of course, there had once been "Jewish Arab" or "Arab Jewish" tribes in Arabia proper, such as in Medina (originally a Jewish-majority city called "Yathrib"), but Muhammad had all their men and boys exterminated and their women and girls enslaved during his religious mission to impose Islam on Arabia.

"the whole middle East has been Islamic for 1400 years"

This sounds like pan-Arab or pan-Islamic boasting and it does not square with historical truth. The Arab-Islamic conquest did not just like that turn every one in the conquered countries into "Arabs" or "Muslims." That took centuries to take place and then there were large Christian, Jewish, Yazidi, etc, populations in the conquered lands. Lebanon still had a Christian majority into the 1930s or maybe as late as the 1960s or 1970s. Egypt still has about 10% Coptic Christians, despite the persecutions, especially but not only at the hands of Salafists like the Muslim Brotherhood.

And the conquered, subject peoples of the Islamic domain [Dar al-Islam] did not always easily accept the Arab-Muslim yoke. There were three or at least two very powerful rebellions in Egypt, which were suppressed in blood [in the Middle Ages].

You could fairly say that Jews in these countries were Arabic-speaking, at least in places where they were Arabic-speaking [the Jews in Iraqi Kurdistan spoke neither Arabic nor Kurdish but rather modern dialects of the ancient Aramaic. Likewise many Christian peoples in Iraq and Syria. But speaking Arabic does not make these Jews Arabs. Otherwise the Irish people would be considered English. Of course Irish folks speak English but resent being called English. I too speak English which does not make me "Anglo-Saxon."
Eliyahu