Here is the final part of the report by Marvin Goldfine of the American Jewish Committee into the status of Iraqi Jews after Israel was declared in May 1948. (For Parts 1 and 2, see here and here). The crowning act of Iraq's expropriation of the Jews was the much publicized case of Shafiq Ades, of Syrian origin, who became one of the wealthiest residents and business men of Iraq. Ades was hanged in front of his family house in Basra in September 1948. The hanging sent shock waves through the Jewish community.

The city of Basra where he lived had a record of more intense anti-Jewish activity, due in part to the personal bias of its chief of police. Prison sentences against Jews there during the period in question were more frequent and severe. That there took place a subsequent flight of Jews from Basra to Baghdad involving a very large part of its Jewish community clearly marks the difference in degree of treatment meted out in these two centers, This is further borne out by the fact that the brother and partner of Ades who lives in Baghdad was simply put under surveillance. Otherwise, he was not molested nor was his property touched.

Ades was charged with complicity with the enemy in selling arms to the Israeli forces in Palestine, Military equipment which he had purchased from British surplus stock two years ago and which he claimed to have sold in Italy was discovered during the Arab-Israeli battle in Palestine,

Curing the initial period after his arrest, Ades threatened he would expose several high government leaders. His trial was thus held huis-clos, only one witness was heard, and the court refused to admit into the chamber the defense counsel composed of three prominent Moslem attorneys. 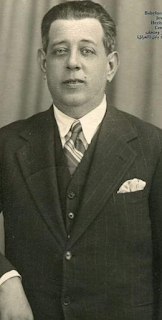 Shafiq Ades: his close connections with Muslims did not save him

For some time previous to the trial of Shafiq Ades in September, demonstrations and threats had been directed against him. As one whose close connections and business interests with the highest Moslem leaders were well known, his arrest came as a shock to many. Furthermore, the Jews did not immediately sense the incident as a threat against themselves, since Ades had never been part of their community. He neither identified himself with them nor helped their institutions.

The circumstances surrounding the hanging of Ades and the barbarities which accompanied it have already been told to the world. His assets valued at 20,000, 000 dinars were officially confiscated, although it is claimed that he succeeded in disposing.of the title of much of it before his execution.

None of Ades' Moslem business associates, involved as much as he was in the same deal in question, were arraigned before the law. That this represented a deliberate attempt by the Government to deal at one and the same time a coup against the wealthiest Jew — because he was a Jew —» and to get some easy capital for its empty Treasury, is a matter no longer questioned.

In October there were some indications that the fury was abating. As one Iraqian testified, it seemed as though the thirst was assuaged after the Ades incident, '»/hat is more probable is that it became only too clear that the policy was leading the government headlong into confusion at an accelerated pace. The Minister of Defense, whose nationalistic policy was attacked as directly responsible for the chaos, had to resign.

He pleaded in his statement that he had merely carried out the directives of the government. That some Jewish businesses were then encouraged to resume operations, and that a few Jewish officials, particularly accountants, were taken back into their old civil service -19- jobs reveal that the government felt it had carried matters too far for its own good.

Whatever the motives, the trend during the past three months has unmistakably been towards a less violent course. In the debate in the lower house on the reply to the Speech from the Threw, one of the prominent members described the "staff reductions" as an "oppressive measure," and added, "we cannot fight communism by police, but by raising the social standard of the country." (The Iraq Times, December 20, 1948). Jews have come out of their hiding places and shops are beginning to reopen.

The application of martial law has been eased and there is no longer the same fear of riots. By no means does this mean that tension has dissipated. On the contrary, arrests and arbitrary judgments seem to be almost as prevalent as before.

The following excerpts from Iraqian newspapers give some idea of the steady pace with which these trials are proceeding? "The court nartial rules that Shaoul Yahya must deposit a guarantee of 200  dinars as it is alleged that he has committed acts which disturbed the public order." (Sawt al Ahrar, Dec. 19, 1948, liberal daily). "Shaoua Bekhar has been sentenced to one year of hard labor as the court martial rules that he is a Zionist, having quarreled with the witness, Mr. Thomas, when the latter insulted the Zionists and Moshe Shertok." (El Shaab, December 30, 1948, pro-Government paper).

"It is ruled that R. Sasson Ghazale and Nissam Rahim must pay a 500 dinar guarantee assuring their good conduct and the maintenance of order, as it is alleged to the court that Nissam Rahim had received a letter from his aunt, Theresa Rabin, who is now in Palestine.

"It is ruled that Ezra Heskel and Murad Abraham must each pay 1,000 dinars as a guarantee that they will observe good conduct and maintain public order during the next two years. If they cannot pay the guarantee they will be imprisoned for two years as it is alleged to the court that they were involved in the smuggling of Jews to Palestine and such actions are dangerous to the security of the State." (El Shaab, January 6, 1949.)

Furthermore, the general situation is such that the Jews cannot at all be sure that further trouble does not lie ahead. The growth of the Istaklal (Independence) Party is cause for much anxiety. Composed of pro-Nazi elements whom the British confined during the war, it is now receiving British support.

Nationalistic, militaristic and anti-Semitic in temper, it is playing a more vocal role both in the government chambers and in framing public opinion. With the dissolution of the Democratic and Liberal parties during the past year, the Istaklal remains the only one of consequence officially permitted to operate. With the most recent change in Government of January, I949 ushering back into office the pro-British Prime Minister, Nuri es Said Pasha, one wonders whether this will mean further development of this group.

England's influence in the direction of the Government itself is said to be far-reaching and decisive. Through her Embassy and Consulate, her British Institutes, the oil companies and business firms, her presence is felt in shaping all official policy matters. That this included a share in the anti-Jewish activity is affirmed quite categorically by many who follow events closely. It was explained that her motive is identical with that of the Arab leaders — namely, to divert attention from opposition both to the government and to Britain, and to channel the wrathful emotions of the discontented toward a vulnerable and powerless minority.

It is said that England has been encouraging the development of the Moslem business firms as opposed to the Jewish ones, and that her Embassy has a blacklist of about 100 business establishments, practically all of which are Jewish-owned, It is from this list that the names were  - supposedly - taken for the arrests made last July on the trumped-up charges of trading with Russia,

Thus, the Jewish community hardly looks to Britain as a source of protection in her present plight.Iraqian Jews also pointed out that American influence has not been relatively significant, and particularly now that the United States is considered pro-Zionist. Even though Iraq was one of the three countries which did not vote for the Human Rights Declaration, they feel that the drawing of the United Nations' attention to their plight would have positive results.

The main hope for an improvement in the situation rests on a speedy settlement of the Palestine conflict and the re-establishment of relations between Moslem and Jew. Iraqian Jews are well aware that renewed relations will not automatically take place because of the intense anti-Jewish sentiment which has recently become so current. But they know the Arabs to be fickle and gullible, easily stirred to commit violence, but as quickly prone to forget their animosity.

Even the leaders of the Government who carried out the oppressive measures are not considered basically intolerant, and are capable of dealing fairly under a different set of circumstances. The Iraqian Government is conscious of world opinion and. very sensitive to pressure and newspaper publicity. But the Jews caution, however, that such revelations as are made should not be in the nature of attacks, but rather should appeal to the traditional harmony that has characterized Arab-Jewish relations in the past.

hank you for drawing attention to this - the sum was wrong, in the original report it was actually 20,000,000. The currency must have been dinars but the sign transcribed as a dollar sign. Now corrected.