Jewish sites to be 'protected from war', but already ruined 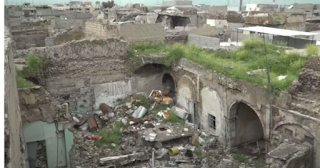 Ruined synagogue in Mosul,northern Iraq
According to the Jewish Chronicle, researchers from the UK, US and Israel have listed more than 2,000 “nationally and important Jewish heritage sites” in Iraq and Syria that they say should be protected during military conflict. The researchers are from the UK based Foundation for Jewish Heritage (FJH), the Center for Jewish Art (CJA) at the Hebrew University of Jerusalem, and the American Schools of Oriental Research (ASOR).But is it too little, too late?
An earlier report  by the Foundation for Jewish Heritage stated that almost all Iran and Syria's Jewish  sites are already 'beyond repair', especially following the rampage across northern Iraq by Da'esh and the ravages of the Syrian civil war. This report, published in June 2020 but no longer online, said that the location and condition of over 350 Jewish heritage sites in Iraq and Syria had been identified.
Posted by bataween at Sunday, January 24, 2021