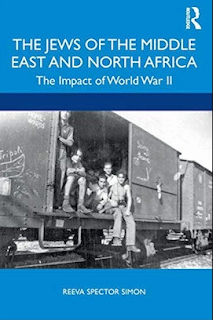 Hitler's plan for the "Final Solution" of the Jews included the destruction of "some eleven million," which likely included victims from Turkey to North Africa. Simon of Yeshiva University believes that only timing and logistics prevented the annihilation when, after 1940, the Axis turned to that region. Simon provides the first country-by-country account of the war's impact on a million Jews from Morocco to Iran.
Simon recounts how most North African Jews came under the control of the German collaborators in the Vichy government after France surrendered in June 1940. Vichy regime regulations excluded 110,000 Jews from government jobs in Algeria, 68,000 Jews in Tunisia, and 35,000 in Syria and Lebanon. Italian planes bombed Haifa in July and September 1940. In June 1941, the Luftwaffe bombed Tel Aviv, Jaffa, and Haifa.
As German troops approached, the grand mufti of Jerusalem, Amin al-Husseini, called on the Arabs to kill Egypt's 80,000 Jews. The Farhud pogrom in Baghdad killed 200 Jews in 1941. Thousands were forced into labor camps in Morocco, Algeria, and Libya, and some were sent to death camps, as were 1,200 Algerian Jews and 2,080 Turkish Jews from metropolitan France. Although Turkish leaders stayed neutral, they were often pro-German.
Read article in full
Posted by bataween at Monday, January 25, 2021

Email ThisBlogThis!Share to TwitterShare to FacebookShare to Pinterest
Labels: Books, Holocaust in Arab and Muslim lands

I won't buy the book of Reeva Spector, as she does not seem to use proper Historiacal Perspective Taking (HPT). North Africa didn't exist as a political entity during the Shoah and World War II, as per A. CHouraqui. And the Shoah was a state-sponsored process, not a continental process. The persecution and murder of the Jews in Europe's French and Italian territories in European North Africa were an integral part of the Shoah in France and Italy respectively.
Edith Shaked
Advisory Board Member H-Holocaust
Flash - Fact, Logic and Authenticity in Shoah History