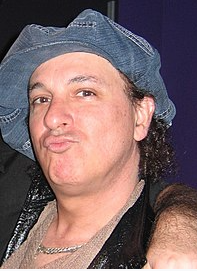 The mainstream media have been running obiiuaries for Sylvain Sylvain, who has died of cancer aged 69. Sylvain made his name as rhythm guitarist with the rock band The New York Dolls. Sylvain Mizrahi came from a Syrian-Jewish family which settled in Egypt and fled after the 1956 Suez crisis. Here is his Wikipedia entry (with thanks: Nigel):
Sylvain was born in Cairo, Egypt, to a Jewish family, but his family fled in the 1950s first to France and finally to New York, United States. The Mizrahis lived first on Lafayette Avenue in Buffalo, New York, but later moved to the New York City neighborhood of Rego Park, Queens, while he was still a child.
Sylvain had dyslexia.[ He attended Newtown High School in Queens and Quintano's School for Young Professionals in Manhattan. Prior to joining the New York Dolls, Sylvain and future New York Doll bandmate Billy Murcia ran a clothing company called "Truth and Soul," which helped define his fashion sense and would play a role in the band's groundbreaking look. He had one brother, Leon (deceased), and one sister, Brigitte.
Before joining the New York Dolls in 1971, Sylvain was a member of the band Actress, which also featured Arthur Kane, Johnny Thunders and former fashion partner, Billy Murcia. He played rhythm guitar for the Dolls[ from 1971 until the group's final dissolution in 1977.
Sylvain and singer David Johansen were the last remaining members at the time the group broke up. After the dissolution of the Dolls, he frequently played with Johansen on some of his solo records.
He started his own band, The Criminals, with another ex-Doll, Tony Machine, and continued to play the New York club scene. He landed a solo recording contract with RCA, and released one album with Lee Crystal (drums; later of Joan Jett's Blackhearts) and Johnny Ráo (guitar).
Read article in full
Guardian obituary
Guy Beart
Georges Moustaki
Richard Anthony
Posted by bataween at Wednesday, January 20, 2021