Biden, don't send the Jewish archive back to Iraq

This year, the US State Department is set to send back the Iraqi Jewish Archive, the collection of Jewish documents and memorabilia found in the flooded basement of the secret police headquarters in Baghdad and shipped for restoration to the US. This JTA article by Carole Basri and Adriana Davis, written on the anniversary of the Baghdad hangings,  is a timely attempt to plead with the Biden administration not to add insult to injury by legitimising the dispossession of a persecuted community. (With thanks: Eta)
For the Basri family, leaving Iraq meant leaving behind not only our own personal belongings but a vast collection of material belonging to the Frank Iny School, the last Jewish school to operate in Iraq.
Frank Iny was my grandfather, and his school was an island of security for Jews as the fires of anti-Semitism raged around them. School records, photos and more were lost, we thought forever. 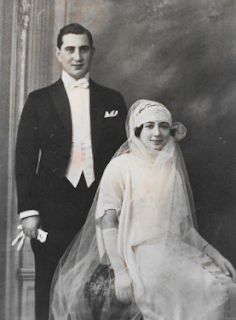 Frank Iny at his wedding to Muzli
However, by a series of miraculous events, in 2003, the communal and personal property that had been stolen by the Baath regime was discovered in a flooded basement of the headquarters of Saddam Hussein’s secret police by US troops.
The United States undertook to salvage and restore the collection. Presently, the collection is in the custody of the U.S. National Archives, where they were restored and displayed at various locations. But now, this priceless collection is once more in danger of being lost forever.
The Iraqi Jewish Archives chronicles the 2,700-year history of the Jews of Iraq — a history that ended when the Iraqi Jewish community was forced to flee. The collection contains tens of thousands of items, including a 400-year-old Hebrew Bible, a 200-year-old Talmud, Torah scrolls, Torah cases and other sacred books including manuscripts by the Ben Ish Hai, the late 19th-century Baghdadi scholar, as well personal and communal records.
Until Saddam Hussein was deposed, many Iraqi Jews were afraid to speak publicly about their heritage. Today, when we interviewed members of the community for our latest film, “Saving the Iraqi Jewish Archives,” one woman we spoke to told us how the discovery of the archives strengthened her desire to protect the remnants of their past for future generations.
We filmed other Iraqi Jews touring the archives and, for the first time in 50 years, seeing images of themselves and their records as young students at the Frank Iny School. Now, the historical record of this once flourishing community is in danger. The State Department plans to return it to Iraq in 2021. We are now in danger of losing the tangible proof of our very existence in Iraq. Only the Administration or U.S. State Department can prevent this from happening.
The US State Department has signed agreements with various Middle Eastern states, including Iraq, Libya, Algeria and Syria, about sending Jewish cultural and religious artifacts back — material that had been stolen from the Jewish communities when they were dispossessed of all their property (and sometimes of their lives).
The Iraqi Jewish Diaspora is fighting against such a miscarriage of justice. If the Iraqi Jewish Archives are sent back to Iraq, it will be another step in the ethnic cleansing of Iraqi Jews. These agreements could have far-reaching consequences for all Judaica that had been saved from these countries and are now in use in synagogues or in museums and cultural centers in the United States.
Read article in full
Posted by bataween at Saturday, January 30, 2021

Want ot sahre the following -even the most secularized Jewish sons and daugthers long for Torah https://www.chabad.org/therebbe/article_cdo/aid/4789491/jewish/My-Baby-Brother-Was-Not-Forgotten.htm