Bahrain synagogue to be re-dedicated next month

Following the Abraham accords with Israel and in anticipation of the revival of the Jewish community,  Bahrain's Jews  will celebrate the  re-dedication of the Manama synagogue and the inauguration of a new Torah scroll *next month. The synagogue has not had a scroll, a rabbi or services for  decades, ever since the majority of the 600-member community fled, mostly to Israel. Sir Charles Belgrave, the British advisor to the Sheikh of Bahrain, recorded in his memoir, Personal Column, the anti-Jewish disturbances of December 1947, which saw Jews injured and two killed, the synagogue ransacked and a Torah scroll desecrated. Here is an account based on his book: (With thanks: Mary)
. 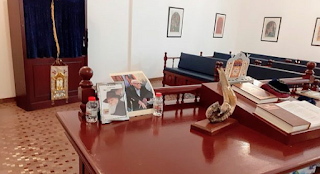 Inside the Manama synagogue (Raphael Ahren)
On 4 December 1947, soon after partition was declared at the UN, riots broke out in Bahrain. Jewish houses and shops were looted, and everything was removed, including window frames. Women and children were badly beaten, and many needed hospitalisation. Two old women died from their injuries. Some families lost everything they had.
The synagogue was looted and everything inside was destroyed. The siddurim were torn, and the Sefer Torah was taken out by a Pakistani man, thrown to the ground and desecrated. He was recognised by a family that lived very nearby, and family members witnessed the event.
Rabbi Shimon Cohen, who was the Rabbi of the community at the time, was beaten up in a street on his way home. He managed to flee from his attackers and found refuge in a bank, and later received treatment in hospital. His house was looted too, and he and his family lost everything. He organised a flight for all his family and made aliyah.
The looters were almost all Persians; among them there were a number of women; very few were Arabs. Some Arabs shielded Jews.
In the evening one of the Sheikhs went with Sir Charles Belgrave to visit some of the Jewish houses. It was a tragic sight, with some huddled in corners.
The rioters and looters were sentenced to prison terms between three and nine months in length.
Many years later, some people tried to sell bits of the Torah scroll to a couple of prominent Jewish businessmen. The sellers were told that the fragments were not useable in their state. Another man just wanted to return the piece in his possession because his family had experienced bad luck since it had fallen into their hands.

Fortunately, a second Torah scroll-- which had been stored in the home of a member of the Jewish community -- survived the looting episode. Another Jewish community member carried it on a 'plane to London some years later, and handed it over to Rabbi Abraham Levy (of Lauderdale Road Spanish and Portuguese synagogue ) at Heathrow Airport. Now it is being used by pupils at Naima JPS, a London Jewish primary school.
*According to this article, Jared Kusher commissioned and paid for a new Torah scroll and presented it to the King of Bahrain in September 2020.
Posted by bataween at Friday, January 22, 2021