Baghdad hangings: the family which got away 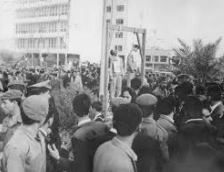 Corpses hanging in Liberation Square on 27 January 1969
Today is the 52nd anniversary of the public hangings of nine Jews in Liberation Square in Baghdad on trumped-up spying charges.
The date  is especially meaningful for Dora Saddik and her family. Dora will never forget the night of 27 January 1969 when  nine Jews, who had been given a hurried show trial, were executed. Then aged 24, Dora was jailed, also on trumped-up spying charges, together with her mother and twin brothers aged 22 and a younger brother aged 16.
Only one wall separated Dora from the condemned men." We were forced to clap hands and call them traitors," she recalls. That same night a helicopter picked up the corpses and ferried them to Liberation Square. Half a million Iraqis came to sing, dance and 'eat chocolates' the next day under the gallows. The regime had declared a public holiday.
Dora is convinced that she and her family would have been 'next on the list' for execution. They were freed following a visit from the Red Cross, which came to see if there were any Jews in Iraqi prisons.
During the three months that Dora and her family were in jail, they were tortured. Her brothers were strung up to the ceiling fan and hit with rubber hoses and iron bars. That was the least of it.
On their release, the family were told that if they said they were treated badly, their house or car would 'accidentally' catch fire.
The family were finally able to to be smuggled out of Iraq in December 1971. Some 2,000 Iraqi Jews took such illegal and risky routes out of the country. Dora has lived in Israel since. She has vowed never again to set foot in an Arab country.
Montreal  ZOOM Commemoration of the Baghdad  hangings
Posted by bataween at Wednesday, January 27, 2021

Who could forget that most horrendous night in our history! My cousin Charles Horesh was among them and he defended his cause ,his crime is being a Jew .That square of libération that witnesses lots of Iraqi blood still.
For those who is longing to neutralize a relationship with the Iraqis.
Dont Forget that night and be ever and ever thankful for Israel

Wow Dora I have heard something about your being detained, but I have never heard the details. All the very best. Tu bishvat Sameich to you and the family