What happened to Iraqi Jews after the state of Israel was declared on 14 May 1948? Iraq declared martial law and imposed severe restrictions of the 150,000-strong Jewish community. It then extorted thousands of dinars from Jewish individuals, arraigned them before military courts and sentenced dozens of Jews to prison terms for Zionism.  Marvin Goldfine of the American Jewish Committee paints a vivid picture of their predicament in 1948. His report is worth reprinting in full. (I have kept the original spelling) . Here is Part 1 of three :  subsequent Parts will appear over the next few days.

On May 14, 1948, the government declared a state of siege and emergency in the country. The Iraqi Parliament passed a measure classing Zionist activities as treason, and according it capital punishment, and a minimum punishment of seven years. The term 'Zionist' received the widest interpretation. This was in fact merely an amendment of a law which existed since the 1930's, by which Zionist activities in Iraq were prohibited and persecuted.

In order to carry out the policy of 'suppressing Zionist activities' and enforcing the state of emergency, special military courts were set up all over Iraq, to try people for such offences as possessing firearms, and 'endangering the security of the state', which latter crime too had the widest definition. These military courts were composed of army officers. They had exclusive jurisdiction over this vague and wide range of 'offences'. There lay no appeal from their sentences, nor any re-trial before a proper civil court. 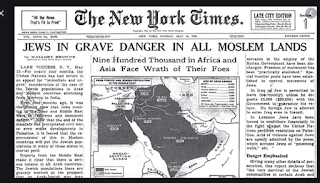 In the Iraq Parliament the declaration of the state of emergency, according special powers to the government, at once aroused the suspicious disapproval of certain members. They feared the government might also use it to suppress and persecute the opposition. In reply to this criticism, Prime Minister Al Pajaji Pasha promised that the emergency laws would be used against Jews only and only, for the effective prosecution of the war in Palestine.

This turned out to be no mere paper measure. It was immediately translated into the most ruthless language of application. With the open invasion of Palestine, all Jews in Iraq were immediately regarded and treated as enemy aliens; but not as normal enemy aliens: they had neither the protection of an investigating Red Gross, nor the restraining, because retributive, power of a foreign state. No foreign consulate took over the affairs of the 120,000 'aliens' thus rendered outlaws in their own home.

A resident of Bagdad vividly described the temper of those first few days of martial law. "Suspecting trouble, many Jews had been purchasing arms in order to be prepared to defend themselves on May 10. It is possible that the Government, knowing this, was cautious, allowing the day to pass with no announcement of any kind. Its silence created grave fears among the Jews and not knowing what to expect, many began leaving their homes. Those who lived in the old Jewish quarter, which is surrounded on all sides by Moslems, joined their fellow Jews 'in the newer Jewish section which is farther removed from the center of the city. At 10 P.M.'the Government established martial law. No demonstrations were permitted.

It was clear that the Government wanted to avoid any sort of trouble because of the numerous groups and tribes which would take advantage of anti-Jewish disturbances to give vent to their anti-Government feelings. After a day or two of calm when, with martial law established, the Government felt itself secure enough to embark upon its program, many arrests were made on the pretense of rounding up oppositionists, Communists and Zionists. Most of those arrested, however, were Jews. The police searched most of the Jewish homes in Baghdad and made arrests on the slightest pretext, such as the discovery of a single letter from Palestine, or a Hebrew book. Those in whose homes arms were found were likewise arrested. However, the majority were released but only upon the payment of arbitrary sums, and once released, were kept under surveillance. Jews were imprisoned on the simple testimony of a Moslem.

The following is a list of activities tolerated, encouraged or initiated by the Iraqi government:

A large series of searchers after arms were arranged in mid-May especially among the Jews of Baghdad. This proved a welcome opportunity for many Moslems to settle old feuds with Jews, neighbors or competitors. The method was to prefer baseless accusations, against them, which at once led to arrest and prolonged detention pending investigation.

No arms were found at the time. But mass arrests of Jews took place nevertheless. All in all 310 persons were arrested by the Iraqi military authorities in the early days of the state of emergency, 160 of them were released after questioning, during varying periods of detention.  xx were held for further investigation and/or trial. Early in June the first trials by military courts began to take place. On June 3, 19148, six Jews were sentenced by a special military court in Baghdad to three years' imprisonment each for 'being in possession of arms'. On June 6, Baghdad radio boasted the arrest and sentencing of a number of 'Communists and Jews' to terms of imprisonment ranging from one to ten years.

It should  here be explained that wherever the authorities desired to prosecute a rich Jew, they labelled him Zionist. If he was poor they labelled him Zionist and Communist. The few people of non-Jewish extraction who were also persecuted at this time, in accordance with opposition fears, and not quite in keeping with the government promise, were for convenience sake called just 'communist'.-

On June 14, all the employees of the Jewish-owned travelling agency Nathanel were arrested, as suspects, no doubt due to the firm's connections overseas. In Baghdad itself, a Jewish driver was killed by a mob on May 15, on the wild accusation having been spread that Jews had offered poisoned candies to Moslem children in the al-Kharjah quarter.

In Basra, about the same time, a Jewish carpenter named Eliahu Daniel, was sentenced to life imprisonment for' 'having possessed a quantity of arms'. Early in June, a number of high Jewish officials of the port of Basra were arrested and detained for periods of 2-3 years on the fantastic charge of 'having handed the plans of the port of Basra to the Zionists'.

A Jewish merchant, Eliahu Rajwan, of Basra, was sentenced to 12 months for "connections with the Zionists." In Basra again, a young Jew named Menashe, received a 20 -year sentence, when in the course of a search a booklet was found in his possession, containing first aid instructions in Arabic. The police said he had received the booklet from Russia. His brother, a local lawyer, received  a 10-year sentence, for having a revolver without a license.

Named among others arrested in Basra at that time wore: Sali Sassoon Sameh, Naji Menahem, Morris, and the brothers Sedaka, In July 1948, a wealthy Jew, Salim Senah, who had been detained in a Baghdad prison since the end of May, was reported to have died in detention, in unexplained circumstances. In Karkouk, 12 Jews were arrested, accused of 'connection with the Zionists'.

In the township of Falujah, between Baghdad and Om'an, a mob attacked two Jewish merchants, injuring one of them severely. The police did not intervene. Later in the day, (May 15) the mob attacked and stormed the Jewish quarter in that township, damaging, destroying and pillaging Jewish real and mobile property. The community was forced to flee for their lives, and to seek refuge in the larger surroundings of Baghdad. In the 3rd military district of Iraq, a military court sentenced one Joseph Aaron to three years' hard labor and a 3,000 dinar (3,000 sterling ) fine, which was to be confiscated to the Treasury from his property, plus further police surveillance for two years, after release.

One Jacob Joseph was sent by the same court to two years' hard labor, no details of the offense being given in either case, A number of Jews were also arrested and tried on charges of having bought land in Palestine, of course prior to May 15, 1948. Those sentenced for this 'crime' included one Shems, and Stanley Shashouah, to a fine of 10, 000 dinars each. Their offense was detected by the authorities by means of postal censorship. In Basra, a whole family, which received a letter from their son informing them that he had joined the Haganah in Palestine, was sent to be detained for three years, including their infant children.

Similarly, a young man, who received a letter from his sister in the U,S., enclosing a press cutting of President Truman's de facto recognition of Israel, was sentenced to three years' detention. Generally all letters received by Iraqi Jews since the middle of May, especially those coming from Palestine, were opened by the censorship, and the recipients prosecuted as if they were responsible for the news and sentiments uttered therein.

Postal censorship was one of the military emergency measures enforced on May 14, I9I48. By July, 1948, the trials and prison sentences of ordinary Jews gave way  to trials of the wealthier Jewish citizens. These were hauled before military courts, usually with the set purpose of extorting from them vast sums of money by way of fines for the benefit of the depleted Treasury.