A plaque to  a man who tried  to save synagogue property during an Arab riot in 1939  has been unveiled in the vllage of Shiloah, on the southern slopes facing the old city of  Jerusalem. Following the riot, theYemenite residents were evacuated.  In 2019 the 19th century Yemenite synagogue was rededicated. Report in Israel National News: 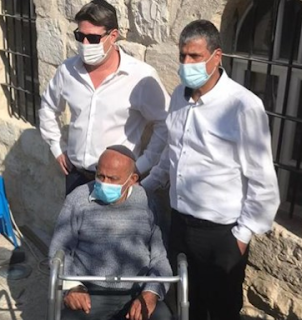 Rahamim Madmoni recited Kaddish for his father Shlomo, killed in the 1929 riot in Silwan
Today for the first time a memorial day was held in the village of Shiloah (Silwan) - also known as the Yemenite village - for Shlomo Madmoni, who was murdered in 1939 on his way to the village to save the Torah scroll and other synagogue property that was badly damaged during the Arab riots led by Haj Amin al-Husseini against the Jewish community.
The annual memorial day was initiated by the public council of the Shiloah village headed by Gadi Bashari, a member of the Zionist Archive.
During the memorial service, a marble plaque was placed in memory of Madmoni and his work to save the village, and for the first time in 82 years since the murder – the Kaddish was recited in the old Yemenite synagogue by Rahamim Madmoni, 86, the son of Shlomo Madmoni.
Read article in full
Posted by bataween at Wednesday, January 13, 2021