Why did Israel fail to showcase our Jewish music?

Three Israel ministries got together in 2020 to commemorate and celebrate the 30 November, the day marking the exodus of Jewish refugees from Arab countries, with a musical extravaganza beamed to all corners of the world through ZOOM. But Janet Dallal, writing in Israel Hayom, was disappointed that the performers sang popular Arabic songs, instead of showcasing the unique Judeo-Arabic culture derived from piyuttim, or composed or sung by Jews.  She laments the fact that Israel has erased the specific musical culture it purports to preserve. The event  thus became no more than a bridge-building exercise with the Arab world. 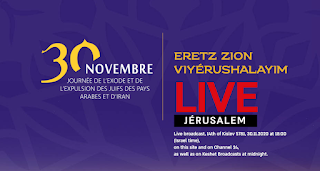 We have been waiting for many years for Israel to begin to commemorate our injustice. The victims of the Farhud, for example, have no place at Yad Vashem, and the education programs lack the contribution of Eastern Jews in preserving the heritage of the people and their part in building the country.
For many years we have been working, not out of a sense of loss or sacrifice, to connect with government ministries ahead of the annual event, to make accessible to senior officials, the one sitting in the country and the one functioning in the world, consulates, embassies and the United Nations. We've worked with the Jews, to tell them about the plunder, the aggression, the deportation, but also about the period of adaptation that the Jews of the Arab countries and Iran experienced when they arrived in their historic homeland, until they stood  and took an important part in the service of the homeland.

Janet Dallal
At an event organized by the Israeli delegation to the UN in 2014 for Jews deported from Arab countries, singer Dudu Tassa and the Al-Kuwaitys performed with his songs influenced by the Iraqi culture he grew up with. With a sense of intergenerational devotion, Tassa said: After a long time, music and culture have been recognized on such a scale, it is not obvious. "Indeed, many Jewish poets, composers and composers can be mentioned, who - if the current generation of educators, music editors and broadcasters and other cultural agents knew - could enrich Israeli culture .
How much disappointment and astonishment we felt - the community of entrepreneurs and activists, who made decades of recognition of our heritage - when it was arbitrarily decided, even this year, that if this is an event dedicated to honoring the culture of Eastern Jewry, then it will be "Abd al-Qadir" "Yazein El-Abdin" - songs familiar in popular Arab culture, but devoid of any connection to Jewish culture.
Even if no one explicitly intended it, these musical choices dispossess ancient communities of Sephardic Jews of their cultural uniqueness, preserved in the chain of generations in exile. But beyond arrogance, as if it were the music we grew up on, and as if playing it was the highlight of our struggle, lies the unfortunate ignorance of contemporary Israel in relation to the cultural heritage of Jewish communities from Arab countries. The fact that most of this culture is not part of the cultural repertoire in Israel, nor is it known to the cultural agents, should bother anyone who cares about preserving the heritage of the Jewish communities in the Diaspora.
Read article in full (Hebrew)