It did not take long, now that Morocco and Israel are about to sign a peace deal, for the historic relationship between Jews and Arabs to be distorted by the Moroccan ambassador to the UN. The 'historical tensions' being glossed over in this Times of Israel news item include massacres, riots and forced conversions. (With thanks: Leon) 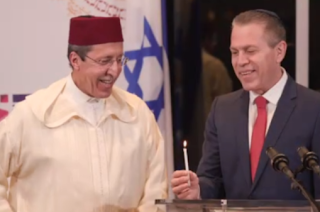 NEW YORK — Morocco’s Ambassador to the UN said Thursday that his country’s Jews never faced persecution, glossing over some historical tensions, a week after Rabat’s decision to normalize relations with Israel.
We are very proud that in the history of Morocco, there was never any persecution of Jewish people. They were just… part of our society,” Omar Hilale said at a Hanukkah candle lighting ceremony in New York hosted by Israel’s UN Mission and the Forum for Cultural Diplomacy.
Read article in full
Muslims must acknowledge fully their relations with Jews
Exploding the myth of Moroccan tolerance.
Jews, Muslims, and the original grudge theory
Posted by bataween at Monday, December 21, 2020

So, they are going for sanitizing the truth? I was afraid this was the case.