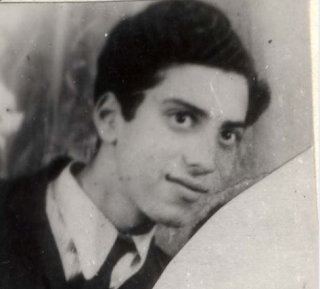 Gilbert Mazouz: shot in cold blood
Since the German invasion of France in 1940, Tunisia had been under the collaborationist Vichy rule, but now the Nazis moved in. The Allied landings during Operation Torch in November 1942 triggered the simultaneous invasion of Vichy metropolitan France and Vichy Tunisia by Hitler’s forces, on November 10 and 9, respectively, according to Edith Shaked, a Shoah specialist. Although the Allies were 25 kilometers from Tunis. the Nazis continued to persecute the local Jews.
An Einsatzkommando unit (an SS task force, a unit of the Einsatzgruppen mobile killing squads in charge of annihilating Jews) led by SS commander Walter Rauff, who was responsible for the murder of Jews in Nazi-occupied Eastern Europe using mobile gas vans, also entered Tunis, prepared to continue to implement the “Final Solution.” 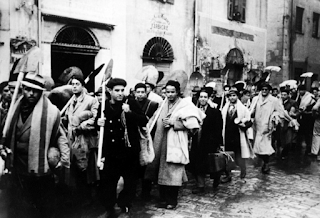 Tunisian Jews being marched to forced labour camps
Edith writes: "He (Rauff) was empowered to “take executive measures against the civilian population” – Nazi jargon for robbery, murder and enslavement.” During its six months of occupation, the ruthless Nazi regime forced the creation of local Judenrat, and imposed antisemitic policies, including fines,
confiscation of property and the forced wearing of the yellow badge (Star of David) by Jews, especially in Mahdia, Nabeul, Sousse and Sfax.
About 5,000 Jews were sent to more than 30 forced labour camps. " On 9 December a German soldier shot in cold blood the first Shoah victim, Gilbert Mazuz, a young handicapped man who was not able to continue to march to the slave labour camp. At its Central Database of Shoah Victims’ Names, where it records the Shoah victims, Yad Vashem has a Page of Testimony for him.
Edith Shaked estimates that 700 Jews are known to have died during the Nazi occupation. This figure likely includes those who perished in the wartime bombings of Tunisian cities.
Posted by bataween at Monday, December 14, 2020