It took 10 months following the liberation of North Africa by the Allies during WW2 for President Roosevelt to repeal anti-Jewish measures. Rafael Medoff describes this disgraceful chapter in history in Israel National News (with thanks: Imre): 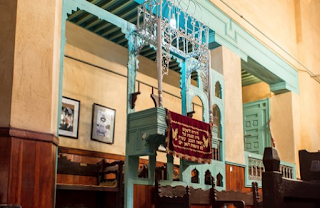 Ibn Dahan synagogue, Morocco
The normalization of relations between Israel and Morocco and the U.S. recognition of Moroccan sovereignty over the disputed Western Sahara have stirred interest in the history of Morocco’s Jews, including during the Holocaust years.Unfortunately some pundits, in their enthusiasm over these developments, have misleadingly portrayed the Allied liberation of North Africa in 1942 as the simultaneous liberation of the region’s Jews from their Nazi and Vichyite persecutors. That narrative papers over the harsh reality of what happened after the Allies’ victory.
The full story of how President Franklin D. Roosevelt treated the Jews in Morocco and elsewhere in North Africa is a deeply troubling chapter in his administration’s history. On November 8, 1942, American and British forces launched “Operation Torch,” the invasion of German-occupied Algeria and Morocco. In just eight days, the Allies defeated the Nazis and their Vichy French partners in the region.
American Jews expected that the liberation of North Africa would also mean liberation for the 330,000 Jews there. In 1870, the French colonial authorities in Algeria had issued the Cremieux Decree, which granted equal rights to that country’s Jews after centuries of mistreatment by Arab rulers (although it did not affect the Jews in neighboring Morocco).
When the Vichyites took over North Africa in 1940, they abolished Cremieux and subjected all of the region’s Jews to a range of abuses, including restrictions on admission of Jews to many schools and professions, seizures of Jewish property and occasional pogroms by local Muslims that were tolerated by the government. In 1941–1942, American Jewish newspapers carried disturbing reports that the Vichyites had built “huge concentration camps” in Morocco and Algeria which housed thousands of Jewish slave laborers.
The prisoners endured backbreaking work, random beatings by the guards, extreme overcrowding, poor sanitation, near-starvation and little or no medical care.According to one report, 150 Jews scheduled to be taken to the camps were so fearful of the conditions there that they resisted arrest and were executed en masse.
With the Allied victory, North African Jews — and their American coreligionists —expected the prisoners to be released and the Cremieux Decree reinstated for Jews living throughout the region. The American Jewish Congress optimistically predicted that the repeal of the Vichy-era anti-Jewish laws would follow the Allied occupation of North Africa “as the day follows the night.
But President Roosevelt had other plans.
Read article in full
Posted by bataween at Sunday, December 27, 2020

Email ThisBlogThis!Share to TwitterShare to FacebookShare to Pinterest
Labels: Holocaust in Arab and Muslim lands, Jews of Algeria, Jews of Morocco

Re the paragraph: President Roosevelt publicly claimed that he had already “asked for the abrogation of all laws and decrees inspired by Nazi governments or Nazi ideologists.” But he hadn’t. When reporters questioned him at a Jan 1943 press conference, FDR replied, “I think most of the political prisoners are — have been released.” But they hadn’t.

Was he briefed incorrectly? Or was he deliberately hiding the continuation of Vichy-era anti-Jewish laws... for his own reasons?

His general policy was to let the Holocaust happen and not to interfere in it or try to stop it. So what he did regarding Algeria, Tunisia and Morocco was strictly in character. See the post at link below: