On 29 November 2020,  122 Palestinian intellectuals wrote a letter to the Guardian, criticising the IHRA definition of antisemitism. Not only do they airbrush Middle Eastern history, argues Ben Cohen in JNS News, but their denial of Jewish self-determination is itself antisemitic.
It is hard to take seriously the expressed commitment to fighting anti-Semitism in this statement in the face of such blatant airbrushing of Middle Eastern history. For millennia, Jews occupied a precarious place in Arab and Islamic societies, occasionally experiencing more benign rulers, but frequently serving as the targets of official discrimination and popular violence.
That history, importantly, includes the Holocaust, as witnessed through the destruction of Jewish communities in German-occupied North Africa; the anti-Jewish riots in Baghdad, Cairo and other cities; and the broader ideological affinities between the Nazis and Arab nationalists, many of whom would come to power and expel their Jewish populations in Iraq, Syria, Libya, Egypt and other countries in the coming decades. 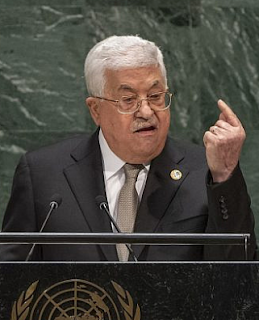 PA leader Mahmoud Abbas addressing the UN
None of this is apparently relevant to these intellectuals, who see their role as nourishing the national mythologies of the Arab world—specifically, that anti-Semitism is not an Arab problem and, relatedly, that the problem of anti-Semitism has been imposed upon the Arabs as a result of European and American backing for Zionism, and the consequent “ethnic cleansing” of the Palestinians during Israel’s War of Independence in 1948.
It is this last claim that gets to heart of the objection these intellectuals have towards the IHRA definition. Recognizing that anti-Semitism is a dynamic phenomenon, the definition includes as examples both classic tropes about Jews and more modern ones that revolve around Israel and Zionism. Asserting that Jews as a nation have no right to self-determination and depicting the State of Israel as a racist original sin against the Palestinians are, under the terms of the definition, indubitably anti-Semitic.
Not surprisingly, this grouping of intellectuals is infuriated that the very positions they promote—that Israel is a racist undertaking, that Jews are an invented nation, that Israeli policies towards the Palestinians are a reincarnation of the Nazi persecution of the Jews—are defined as anti-Semitic, and therefore as morally and politically tainted, by a growing segment of international opinion. But instead of honestly reviewing these positions in the light of historical changes—something that intellectuals are supposed to do—they have simply doubled down on the discredited anti-Zionist campaign that was waged by Arab regimes and the Arab League before Israel even came into existence.
Read article in full
Posted by bataween at Thursday, December 10, 2020