My part in the re-opening of the Heliopolis synagogue

Albert Herscovitch was born in Egypt and now lives in Montreal where he has been actively raising the issue of the forgotten refugees from Arab countries. Less well known is the part he played in the re-opening of the Vitali Madjar synagogue in Heliopolis, Cairo in 2011. He found that his childhood synagogue in Heliopolis had been gathering dust and was colonised by pigeons. He takes up the story.
I have been militating for years for the forgotten refugees of Arab lands. I was one of the founders of AJOE (Assoc. of Jews of Egypt - we don’t call ourselves Egyptian Jews since we were never given Egyptian nationality), here in Montreal in 2002.
Now to my topic. In 2010 (miraculously, just prior to the Midan El Tahrir revolution) I decided to go back to Egypt for mainly two reasons. One, was a very special solo mission to try to reopen the Synagogue of Maimonides in old Cairo which the authorities had suddenly closed for political reasons. That mission was miraculously successful thank G-d, but that’s a topic for another discussion. 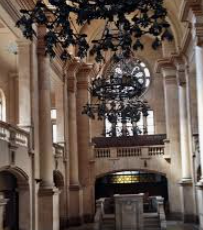 The grandiose chandeliers of the Vitali Madjar synagogue
The other reason, was to go back to my roots and revisit my house, my schools and my synagogue. I needed to be cured of my nostalgia. I was born and raised in Heliopolis, an upscale garden suburb of Cairo not far from Mubarak’s villa. There was only one synagogue in Heliopolis where my family went. That was the Vitali Madjar synagogue, which was attached to the Jewish school I went to.
It would be too long to relate my adventures and experiences during my whole month in Egypt and my attempts to visit my grandparents graves in the Bassatine cemetery in Old Cairo. Suffice it to say that generally, my experience was very positive (except for the cemetery experience) and I encountered absolutely no problems on the part of the authorities or the people I met. They were all very courteous, respectful and accommodating (except for being arrested on a couple of occasions for minor infractions due to my not adhering to regulations I was unaware of).
One of the places I wanted to visit was my synagogue in Heliopolis, where my family had four seats assigned to them. When I went there, I found two policemen armed with machine guns at the door. The door was locked with a huge chain and two padlocks. Since I could not enter, I tried to take a picture of the outside. I was immediately prevented by the policemen. My begging and pleading with the officers did not help. So I tried to snap a picture from far. They saw me and warned me that I would be arrested if I did. Then came the negotiations for a price to be paid to each one of them for one single picture. Fearing subsequent reprisals I refused. That was the end of my visit. 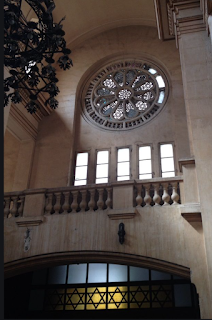 The vaulted ceiling of the synagogue
Frustrated and not wanting to give up, I decided to use a different approach. I went back to meet with Mrs. Weinstein Z’l,  the President of the Jewish community at the time. I had dealt with her for all my other endeavours.
I was told by Mrs. Weinstein that the synagogue had been closed for the last 40 years, no one had entered since, and they didn’t even have the keys to get it opened. After more pleading, begging and negotiating, this time,  with Mrs Weinstein, I found myself in a cab with two of her Egyptian assistants on our way to Heliopolis. Neither the cabdriver, nor the two men wth me knew the way to the synagogue. I had to be the one to direct them.
When we finally arrived, one of the men paid the cab driver and we got out right in front of the synagogue, where two new policemen were standing on guard with their machine guns. The two men with me, were each carrying a big bag. I was told that we had to wait there for a short while. No explanation was given.
A few minutes later, an open van arrived. It was full of policemen! They all jumped out of the van. Out of the van came out two high ranking officers (I could tell by the number of stars on their shoulders). I got the shivers! I thought that was it, I was going to get arrested again and who knows what else might ensue. No one knew of my whereabouts, not my family, not the Canadian embassy where I had made sure to register upon my arrival in Egypt.
The high ranking officers approached the two men who were accompanying me and asked them in Arabic if they had brought the tools with them (I understood since I speak Arabic fluently). The men opened their bags and out came hammers and metal saws. Together, they proceeded to smash the padlocks on the door with their hammers and saw off the heavy chain. They pushed the door open. The officers looked at me with a smile and invited me to be the first one to go in by ushering me with their hands and saying: etfadal (welcome). I just couldn’t believe my eyes! I thought it was all a dream!
Together, with the two men, the two officers and about ten policemen, we all went into the synagogue. It was a complete mess! There was dirt and pigeon droppings everywhere. The beautiful Turkish rugs that used to cover the marble floors were all gone. The pews were covered with an inch of dust and pigeon droppings. My heart was racing! I wanted to get to our seats. I knew exactly where they were. Wherever I went, I was closely followed by the contingent that had entered with me.
Once I got to our seats, I was overcome by emotion and I broke down in tears. The two officers came to comfort me and told me that they understood my feelings. They ordered two of the police contingent to go out and buy me a soft drink after asking me what I preferred. Once I managed to calm down, I thanked them warmly expressing deep appreciation for their gesture and understanding. They were extremely friendly. I asked if I could take pictures.
Not only did they grant me permission, but they themselves were amazed at what they saw in terms of chandeliers, decor, etc. and proceeded to pull out their cell phones and take pictures themselves. They were amazed at what they saw and told me that they had absolutely no idea of what was inside. They thought it was an old age home that was no longer in service. Yet, the Ten Commandments stand majestically on top of the outside of the synagogue. But who can blame them for their ignorance. In fact, they were not totally wrong. My Jewish school adjoining the synagogue had indeed been transformed into an old age home but was no longer in use. The Jewish community was no more.
And so, I spent the rest of the time taking pictures inside and outside the synagogue to my heart’s content, all with the tacit approval of my new friends. I could not thank them enough and they in turn, thanked me for giving them the opportunity to find out about the beauty of my Heliopolis synagogue.
And that  is my story of the Heliopolis synagogue, in some detail.  I was instrumental in getting it reopened.
The rest, as they say, is history. A new padlock was installed on the door of the synagogue by Mrs. Weinstein’s people. She later told me with a glean in her eyes that I had started a new era for the forgotten synagogue of Heliopolis. They were going to undertake a full cleanup of the place and try to bring it back to a semblance of its old glory. 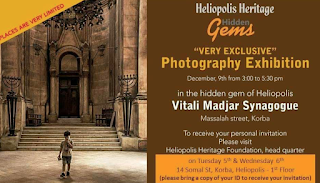 Epilogue: since its restoration,  the  synagogue has hosted a photographic exhibition and a concert of Sufi songs and dances. Not every one is happy : some even think its use as a cultural centre is blasphemous. Albert's reaction? "Although I find it regrettable that my synagogue was turned into a concert hall, I am somewhat comforted that it is alive again."
Posted by bataween at Thursday, December 24, 2020

This essay includes some factual inaccuracies. It was never restored and there was neither a sufi concert nor a photo exhbition. Moreover, there is no evidence of your alleged role in re-opening and it remains closed. In 2013, it was handed over by the Heliopolis police station to the President of the Jewish Community in Cairo as is documented in a police report which states that the synagogue hasn't been entered before. The Drop of Milk Association cleaned it up in 2016. Kindly elaborate more on your visit as I asked a JCC representative for research purposes and they don't seem to have a record of this.

Please see invitations above to Photographic exhibitions etc. The synagogue is closed because there is no functioning community, but it has been under the management of the JCC since Albert Herscovitch 'opened' it.

I am actually a researcher who has covered the Jewish Community in Cairo (JCC) and its Drop of Milk Association (DOM)
closely since 2016. The invitations were designed but both events were cancelled and never took place. Ms. Weinstein's right-hand man has confirmed that the synagogue was re-openend when the Heliopolis police station transferred the synagogue's control to the JCC in 2013. Mr. Herscovitch might have visited it with Mrs. Weinstein, but as is documented through a police report, the synagogue was officially re-opened by the JCC. The only record of Mr. Herscovitch and the JCC is during his visit in 2010 and him volunteering to read during Shavuot at the Maimonides synagogue.

The JCC and DOM continue to maintain the Vitali Madjar synagogue in Heliopolis and organize some tours to the synagogue.