Muslims must acknowledge fully their relations with Jews

Kunwar Khuldune Shahid lives in Pakistan, which makes it all the more remarkable  that he has been refreshingly blunt in this Spectator article, in which he urges other Muslim states to follow the Moroccan model of peace-seeking with Israel. The Muslim world must acknowledge the good as well as the negative aspects of its historical relationship with the Jews. (With thanks: Lily) 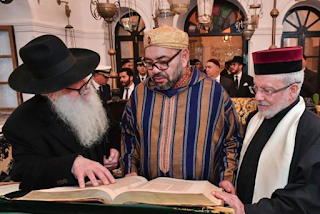 King Mohammed VI of Morocco visiting Beit Dhakira in Essaouira, a synagogue converted into a museum devoted to the memory of Moroccan Jewry

After becoming the latest Arab state to formalise ties with Israel, the fourth in as many months, Morocco has gone a step further; it will start teaching Jewish history as part of the school curriculum. Morocco is now the first modern Arabic state to embrace its tradition of religious pluralism — a pluralism that has over the decades faded into mono-cultural Sunni Islam.
Over the last 70 years, the number of Jews living in Morocco has fallen from half a million to just 2,000. In January, Moroccan King Mohammed VI visited a Jewish museum and synagogue in Essaouira to celebrate the country’s pluralistic past as well as the Moroccan monarch’s recent attempts to restore Jewish heritage sites.
Indeed, in the 18th century, Sultan Mohammed Ben Abdellah oversaw the building of nearly 40 synagogues in Essaouira, a city where once four in ten of its population was Jewish. Before that, Morocco welcomed Iberian Jews cast out of modern-day Spain by the 1492 Alhambra decree, giving them legal autonomy over their worship.
As the Muslim world begins to reconcile with Israel, so too must it acknowledge the full history of Islam’s relationship with Judaism. This won’t be easy, of course, since the past is loaded with animosity for Jewish peoples — but there are also neglected, older tales of Islamic multiculturalism. Islam, as its more liberal proponents like to remind us, was the harbinger of the European Enlightenment.
The exodus of Jews from the Muslim world began in in earnest in the 1940s, eventually evolving in some countries from persecution to slaughter. Nazi Germany’s Holocaust extended into Axis controlled north African territories during the second world war. Hundreds of camps like the one in Jadu, Libya illustrate tales of barbarism reserved exclusively for Jews in the Arab world under the Axis rule.
Many local Muslims didn’t find Jewish discrimination particularly repulsive, perhaps owing to the preceding Ottoman rule which had already established Jews as inferior ‘dhimmis’, legally upholding Muslim supremacism, while overseeing multiple pogroms. Indeed, many Arabs cheered in Tunis when the Jews were paraded by German occupying forces.
Under the Nazi-allied French Vichy regime, Algeria became the second country where Jews were stripped of their citizenship after Germany. Even so, amid instances of Arab collaboration with the Third Reich, there were many, lesser-acknowledged stories of Arabs safeguarding Jews.
Tunisian landowner Khaled Abdul Wahab, ‘the Arab Schindler’, risked his life to protect many Jewish families. Similarly, Moroccan Sultan Mohammed V saved the Jews of Casablanca, as he resisted the anti-Semitic laws promulgated under the Vichy rule.
There are similar tales from Turkey, Iran and other parts of the Muslim world, with over 60 Muslims honoured as ‘righteous’ at the Yad Vashem memorial And it is easy to understand why theirs are lesser-known stories.
After the war, the Jewish populations of Tunisia, Sudan, Libya, Morocco, Algeria, Egypt were pressured to leave, some had their passports stamped ‘exit with no return’ as anti-Semitism spiralled in the Muslim world. While geopolitical commentators often point to the creation of Israel in what was seen as Arab land, the anti-Jewish feeling is in fact millennia old.
Quranic verses telling Muslims ‘not to take Jews as friends’ and Hadiths mandating the killing of Jews ‘hiding behind stones and trees’ continue to be taught across the Muslim world. Just as Judeophobia mandated by scriptures became the root of the Arab and Muslim world’s antagonism towards Israel, the ongoing formalisation of ties is also backed by an Islamic rationale.
It is this reformist interpretation of Islam, coupled with recognition of the crimes perpetrated by their states and empires — similar to the ideological course correction undertaken by Europe after world war two — that will help Muslim states progress. And today, the biggest threat to such progression comes not from Arab monarchs or dictators, but democratically elected populists in the Muslim world.
Judeophobia dominates all from the largest Muslim state Indonesia to the officially secular Bangladesh.
Read article in full
Posted by bataween at Friday, December 18, 2020