The Israel-Morocco peace deal is a reminder of  how far we've come in our history of struggle and persecution, writes Libyan-born Gina Waldman in JNS News. Morocco's decision to teach Jewish history and culture in schools is unprecedented. 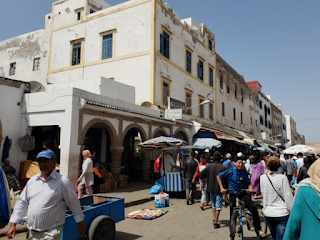 A Moroccan mellah
Before normalizing relations with Israel, Morocco included the history of its Jews in an unprecedented national school curriculum—a move that also “defies darkness,” by embracing the richness of the country’s pluralistic society.
Indeed, Jewish history is an integral part of the colorful, textured tapestry of Moroccan history. No Arab country has ever included Jewish history in its curricula. In fact, most of my Arab friends tell me that they only know about Jews living among Arabs from what their grandparents told them.
During my last visit to Morocco, I “relived” my days in Tripoli, Libya as a child. While walking in the mellah (Jewish quarter) in the Old Town in Fez, my family and I would encounter young men with large trays over their heads. The trays had freshly baked cookies that they were bringing back from the local community oven.
No matter how many trays we encountered in the mellah the carrier of the cookies would always stop and offer us some. At the sound of our shukran (Arabic for “thank you”), the young men would invariably ask, “American?” and give us a warm welcome.As I walked the narrow labyrinth of the crowded mellah. I traveled back to Tripoli as a young girl with a tray over my head carryin nonna (grandma) Regina’s Shabbat bread to the community oven. The smell of coffee beans roasting on the open fire, the fragrance of the cumin, harissa and other spices, invaded my nostrils.
While in Morocco, we visited Jewish sites, the ones the guide “chose to show us” that were still standing. We saw a cemetery that we were told was maintained with funds from Moroccan Jews in France, some small synagogues and a dilapidated Jewish community center.
Unfortunately, the cemetery in Tripoli where my ancestors were buried has been desecrated.
Read article in full
Posted by bataween at Thursday, December 17, 2020

The question is if they will teach the real history, or a carefully sanitized one.

What sad, victim oriented hand wringing. We must never forget what WOULD have happened, not only to the Jews of Morocco but to the nearly one million others spread across the Muslim Orient from Casablanca on the Atlantic to the ecologically ruined Tigris/Euphrates valley & Iran on the East. And from the Mediterranean shores on the North to Sudan & {mostly Christian) very-very troubled Ethiopia in the heart of Africa. The aboriginal roots of our brothers & sisters in these lands go back more than 1,500 years before the depredations of Islam. Ask the Armenians & the Hindus what happens when their Muslim "neighbors" think they've got the upper hand .What makes any of you folks think they've changed ? Their psychic culture is so profoundly alien to ours, that any effort on our part to "kiss & make-up" is automatically viewed as weakness & groveling. And those deeply ingrained behavioral patterns are wreaking havoc havoc among their hapless 'host societies' in Europe, the Americas & "Down Under" Their is only one "language" that the Ameleks & Roidefs of the world understand. Please GOOGLE: {1} Norman L. Roth {2} Norman L. Roth, JEWIS ISSUES WATCHDOG