Libyan politician:'Jews are needed more than ever"

On 30th November, the official day to commemorate the exodus of Jews from Arab countries, the Democratic Party of Libya published a joint statement with the Union of Libyan Jews and the World Organisation of Libyan Jews, calling for the return of Jews to Libya. The statement is signed by Ahmed Shebani, the party's President. 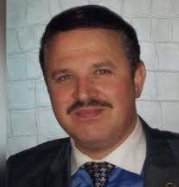 Ahmed Shebani: Libya is in a state of denial about its Jews
"The 30th of November 2020, is the commemoration day of the expulsion of Arab Jews from their countries.
"In 1967 Libyan Jews were stripped of their citizenship and property and expelled from Libya allowing each of them nothing more than a single suitcase and the sum of $20 to take. It was a crime against humanity in the full sense of the word, yet strangely, there had never been any Security Council resolutions in this regard.
"Jews had continuously lived in Libya for over 2200 years. They are Libyans beyond any doubt. Both history and archaeology testify to that. Moreover, they had never been involved in any conflict with fellow Libyans.
"Indeed, Islam grants freedom of religion to all peoples and does not approve of the persecution of any minorities whatsoever. What happened to Libyan Jews was blatantly against Islam. The Democratic Party stands in solidarity with the right of return of Libyan Jews and there is no linkage between them and any other regional conflict.
"The former President of the Libyan Jewish community in diaspora and a founding member of the Democratic Party, the late Mr Rafael El-Falah, used to repeat: “Libya would not rise as a peaceful and prosperous country unless it transcends its state of denial of the historical wrong that befell her Jews and accepts them back home“.
"As we Libyans stand nowadays to establish a functioning secular democracy, we must take what the late Mr El-Falah said to heart. A democratic Libya will have no place for racism. Libyans Jews are like salt to food and like a witness to a contract. Libya needs them now more than ever in the forthcoming reconstruction phase and to jump start the private sector in our national economy which was brutally vandalized over 42 years of failed socialism and brutal military dictatorship.
Long Live Libya!"
Jews won't return to Iraq
Posted by bataween at Thursday, December 03, 2020