Israel to press for UN resolution on Jewish refugees

The Israeli ambassador to the UN, Gilad Erdan, has vowed to pass a resolution on Jewish refugees in the General Assembly. He writes in the Jerusalem Post: 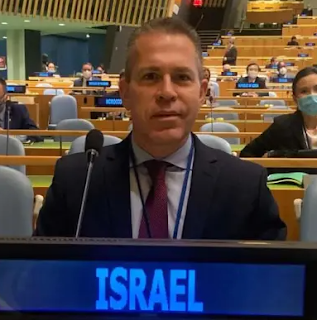 Ambassador Gilad Erdan
I will lead a diplomatic campaign to pass a resolution in the United Nations General Assembly to recognize their plight.
I do not seek a quarrel with our neighbors, but to ensure that equality and justice is finally provided for the Jewish communities that have been scorned by the world for more than 70 years. I have already formed warm relations with many ambassadors here and will build on these ties to garner wide international support for this proposal.
We will rally foreign ministries worldwide and together, with the help of Jewish organizations, I believe we can put an end to UN ignorance on this issue. Peace can only be reached through strength, mutual respect and recognition of the truth.
If the international community is serious about promoting peace between us and our neighbors, then it must also recognize historical facts, including the trauma of Jews from Arab countries. A new discourse will not change history, but it is time that their plight is recognized in the halls of the UN.
The Abraham Accords are a source of light for thousands of Jews who still live in Arab countries today. The normalization of ties between Israel and the UAE and Bahrain – and I hope soon with other Arab countries – will encourage Arab leaders to provide their Jewish communities with more support, allowing them to practice their culture proudly and without worry.
Read article in full
Posted by bataween at Wednesday, December 02, 2020

even if the UN passes the resolution it will never enforce it....dont trust the UN which has passed Resolutions...condeming Zionism as racism....Remember Obama neutrality on the UN vote...which caused the US to become a accomplice..>!!!

I appreciate Anon's sentiments on Obama but in fact he and his team, including Joe Biden [ironically given present circumstances] actually organized support for the resolution, UN SC res 2334, of December 2016. That is, they cynically planned to abstain on it but they wanted all other Security Council member states to vote for it. See posts at the links below: