Israel-Morocco deal is a triumph for Andre Azoulay

The excitement was palpable in Israel as Morocco became the fourth Arab country to agree to ‘normalise’ relations with  the Jewish state after a concerted diplomatic campaign by the Trump administration. The two countries agreed to start direct flights and  open offices in Rabat and Tel Aviv as a prelude to establishing full diplomatic relations.

Last night, during the ceremony to light the first Chanukah candle at the Western Wall, Prime Minister Netanyahu said: “The people of Morocco and the Jewish people have had a warm relationship in the modern period. Everybody knows the tremendous friendship shown by the kings of Morocco and the people of Morocco to the Jewish community there. And hundreds of thousands of these Moroccan Jews came to Israel, and they form a human bridge between our two countries and our two peoples, of sympathy respect, of fondness and love. I think that this is the foundation on which we can now build this peace."

The quid pro quo for a full peace is US recognition of Morocco ‘s claim to Western Sahara.  In 1975 the kingdom organised a  peaceful Green March of thousands of Moroccans into Western Sahara. Annexation is hotly disputed by the Algerian-backed Polisario guerrillas and the people of  the Sahel. 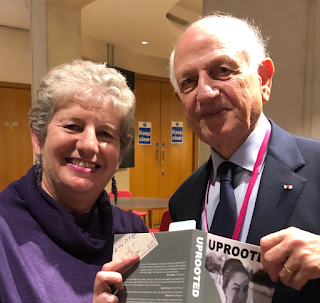 The deal  also represents a triumph for Moroccan royal  adviser Andre Azoulay. For decades Azoulay has instrumentalised the Jewish community in Morocco in order to gain US support for Morocco’s foreign policy objectives. Although only 3,000 Jews remain in Morocco out of a community of 265,000, Azoulay has pushed Jewish culture to the fore. Lately, it was decided to include Jewish history in the school curriculum. Azoulay is behind the preservation of Jewish heritage, Muslim-Jewish interfaith initiatives, music festivals and concerts attracting Jews and Muslims. Every mixed concert ends with the  singing of Allah Hu Akbar, a kind of anthem to Morocco ‘s claim over Western Sahara.

There has already been cooperation between Israel and Morocco on the intelligence front. Morocco has helped broker the peace deal with Egypt, and 50,000 Israelis of Moroccan extraction visit the country every year.

In spite of the efforts of the philosemitic Mimouna group, many young Moroccans are antisemitic and there are Islamist  sympathisers in the country. There have been several attempts to overthrow the king.

A rich Jewish past (Times of Israel)

One can only hope the incoming Biden administration doesn't scuttle it all.

Heather is right to fear the Biden administration. Of course, Biden is already in mental decline which the US mass media usually overlook. So Biden himself would not be making the decisions. But some of his chosen team are pretty nasty types who worked for the "Iran nuke deal" that was meant to allow Iran to obtain a nuke weapon. Those who believe that the nuke deal was meant to stop Iran from getting a bomb are naive about a certain trend in US foreign policy. After all, in the 1990s, Prez Clinton made a deal with North Korea to stop that Communist state from getting The Bomb. Now, about 25 years later, North Korea already does have The Bomb. So Obama and his team knew that their agreement with Iran, the JCPOA, would not stop Iran from getting The Bomb, just as Clinton's agreement had not stopped North Korea. And let's not forget the $150 billion that Obama gave to Iran, including at least one billion in cash dollars that he had shipped to Iran. Much of this cash was subsequently used to fund activities of terrorist groups, such as Hizbullah, the Houthis, etc.
Eliyahu

Here is what PM Netanyahu said about the Iran nuke deal just the other day: