For Mizrahim, values are more important than economics

With their steadfast attachment to values like patriotism and religion, Mizrahi Jews in Israel befuddle US liberals by viewing their universalist vision with horror. For an explanation, liberals should listen to what sociologist Nissim Mizrachi has to say, writes Jonathan Tobin in JNS News (with thanks: Melvyn): 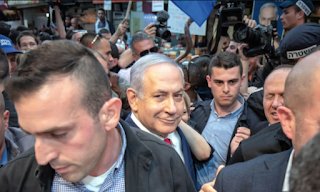 Mizrahim naturally support Netanyahu
Liberal American Jews are generally confused when it comes to Israelis. On the one hand, they claim to have empathy and support for Jews of color. But in order to inflate the number of those who fit that fashionable category, which offers an opportunity for post-Black Lives Matter virtue signaling about race issue, they must conflate Mizrahi Jews who trace their origins to countries in the Muslim world with black or Hispanic Jews into one catch-all category. But while concern about treating all members of the Jewish community fairly are well-founded, the condescension implied in the effort only increases the contempt with which most of the Mizrahi world views this mindset.
This is amply illustrated by the latest attempt by The New York Times to explain to its uncomprehending left-wing readership why certain populations don’t vote as they think they should. So in an effort to elucidate the stubborn refusal of red-state Trump voters to vote in a manner that the chattering classes think is in their interests (i.e., for liberal Democrats who promise more social justice and entitlements), the Times has turned to Israel for an explanation. Jerusalem bureau chief David Halbfinger took a deep dive into the question as to why Mizrahi Israelis vote for the right-wing parties and support Prime Minister Benjamin Netanyahu.
Just as American liberals are frustrated by the failure of their appeals to white working-class voters, the same is true of Israel’s left-wing parties. The Israeli left offers a Mizrahi population that is more likely to be disadvantaged the sort of socialist benefits that ought to entice them, as well as a more universalist view of human rights that promise more inclusion that are instead viewed by this segment of the population as not only undesirable but a threat to their community and the nation. Halbfinger finds his explanation in the work of Israeli sociologist Nissim Mizrachi, who came to his attention as a result of a lengthy interview published in Haaretz in January. In it, Mizrachi (who, as his name indicates, is himself a product of an upbringing in a poor Mizrahi Jerusalem neighborhood with a mother who had immigrated from Iraq) tried to tell the readers of the left-wing newspaper why Mizrahim were solidly behind Netanyahu and the right.
Much like the 2004 book What’s the Matter With Kansas? in which journalist Thomas Frank sought a reason for that state’s poor farmers’ loyal support for Republicans, the answer is not in economics but values.

According to Mizrachi, values and identity—and the security issues related to them in the Jewish state—all make it nearly impossible for the left to make progress with a demographic group that now forms the majority of Jewish Israelis. It’s not that, as American liberals complain, people vote against their interests or that they are too backward to understand or appreciate liberal values. On the contrary, Mizrahim view the liberal vision of the Israeli left—in which the Jewish nature of the state is downgraded or shunted aside as being less important than a belief in universalism and democracy—with horror. As Mizrahi has written, Mizrahim came to Israel to be in a Jewish state where their rights and security would be protected. They don’t view themselves as an oppressed minority group or desire “inclusion.” They just want Israel to be a Jewish state whose security is defended without compromise. Hence comes their natural support for Netanyahu, Likud and other right-wing parties—just as they supported Menachem Begin in the past—and their utter disdain for the Israeli left, even if it seeks to portray itself as the champion of the oppressed.

There is more to the leaning of most Mizrahim to the nationalist Likud party than Prof Mizrahi and Mr Tobin seem to think. One thing is that the "left-wing" "socialists" exploited the workers economically, and not only Mizrahim. The Histadrut labor union also was one of the biggest if not the biggest capitalist in Israel. The Histadrut was supposed to represent the workers but it also had its own factories, companies and other enterprises. And in some of these companies, it liked to place Labor party hacks into managerial jobs to keep them employed and fed without working too hard. Thus many of these enterprises were top heavy with management, unnecessary management economically speaking. For instance, Alliance Tire Co. was a profitable privately owned business in Israel and made good tires. Then it was bought by the Histadrut --part of the Mapai/Labor party/Mapam complex. They loaded management with superfluous party hacks and the company started losing money.
Another example, several years after coming to Israel, my wife got a teaching job with the Amal network of schools run by the Histadrut. To keep the job she had to open an account in Bank haPoalim [= Workers' Bank], then owned by the Histadrut, and join the Klalit health fund, also owned by the "leftist," "socialist" complex (although we already belonged to another health fund). Now, you should know too that in Israel teachers got tenure after one year teaching in a school. Hence, after one year, she was dismissed from her job in order not to give her tenure, although she was a good teacher. She was not the only one. That is how the Histadrut protected the workers, in this case teachers.
So there you have other reasons to loathe the Histadrut and the "left." Moreover, the bad dream of Oslo and its bloody aftermath deter people from listening to the peacemongers. And Israelis do not have to be Mizrahim in order to be repelled by "peace" rhetoric and peacemongering [which is pretty much equivalent to warmongering].
Eliyahu