A Dubai museum has signed an agreement with a new Israeli centre, in the planning stage,  devoted to the heritage of Jews in  Islamic lands,  with a view to increasing 'people-to-people' cooperation between the UAE and Israel. As reported in the Times of Israel, the document will celebrate what Arabs and  Jews 'have in common, rather than what divides them.' See my comment below. 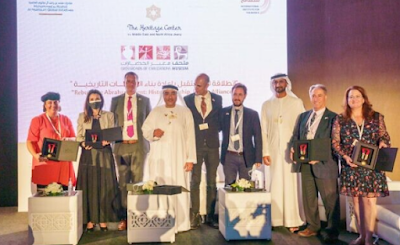 A delegation from Israel was hosted by the Museum of the Crossroads of Civilisaitons in Dubai on 6 December
According to the document, the institutions seek to “highlight the positive historic relationship between Jews and Arabs, to better understand the culture of the other, to strengthen and highlight the contribution of both peoples to humanity” and to collaborate on projects to create more understanding of each other’s peoples.
In the document, the two centers also stated that they “should teach about what unites Jews and Arabs rather than that which divides us.” It mentions Jerusalem as holy to Judaism, Islam and Christianity. Both centers committed to becoming “hubs of people-to-people cooperation and partnerships,” according to a press release issued by the Heritage Center.
“Importantly, both centers will support preservation efforts of historic and archeological sites of importance to both Jews and Arabs in the Middle East and North Africa.” Sunday evening’s launch event in Dubai was held under the auspices of the International Institute for Tolerance, a quasi-governmental organization established by the ruler of Dubai, Mohammed bin Rashid Al Maktoum.
“History is being made at this event and together on the eve of Hanukkah, we can bring light to the whole region. There is no better way of doing this than by reflecting and celebrating our common heritage and culture,” said Jerusalem Deputy Mayor Fleur Hassan-Nahoum, who has been very active in promoting ties between Israel and the United Arab Emirates.
Ahmed Obaid Al Mansoori, the founder of the Crossroads of Civilizations Museum, called the event a “turning point in Arab-Jewish relations. ”The September 15 UAE-Israel normalization agreement paved the way for political and diplomatic ties between the two countries, “and now it is our role, as people of both nations to translate the peace agreement into tangible outcomes through people-to-people connection, interactions, promoting peace and tolerance in the region,” he said.
“In the Middle East and North Africa, we have countless Jewish sites without community, and in Israel we have community without memorial or an official institution for the preservation of the history and culture” of Jews from the Middle East and North Africa, he said.
“Tonight, we rectify both of these gaps by holding the first-ever event in the Arab world committed to remembering lost Jewish communities and the foundation of building a heritage center” in Jerusalem for Jews from the areas.We as a people have a rich and vibrant history in the Middle East and we are excited to be celebrating what we have in common rather than our differences,” said Danny Hakim of the Azrieli Foundation, a philanthropic fund that supports the Heritage Center. “Part of understanding our Jewish history means embracing and appreciating our Jewish heritage in the region.”
Read article in full
My comment: the cooperation agreement builds on the new atmosphere created by the Abraham Accords. To celebrate what Arabs and Jews have in common rather than the differences, has already stirred some criticism. However, as a first step, it is probably wise to put the accent on the positives in the relationship between Jews and Arabs, as long as the points of division do not end up being whitewashed. It is a smart move to make the preservation of sites important to both Jews and Arabs as one of the objectives. This should help counter the tendency in the Arab world to erase its Jewish history and arrest the decay or destruction of Jewish heritage.
Posted by bataween at Tuesday, December 08, 2020

Would this museum include the history of the Hijazi Jews massacred by Mohamed and his followers?

We are a group, in Israel, France, Switzerland and beyond which includes JJAC, Bnai Brith, Kinorotenou, the Coalition of Associations of Jews from Arab and Muslim Countries in Israel, etc.. a group which has been actively researching and reflecting on the project for a center dedicated in Jerusalem to the history and culture of jews from muslim countries.

In our general opinion, this MOU which was signed, without our involvment, with the Emiratis is very problematic because it is based on glaring inaccuracies.

- It refers to a "historically positive relationship between Jews and Arabs" when the relationship has not been symmetrical or positive in both directions: the Jews contributed positively in all fields (music, crafts, health, industry, commerce, etc.) while the Arabs imposed the very negative, unfair, humiliating and cruel dhimma, which ultimately forced the Jews into mass exile.

- It implies the need for mutual understanding, acceptance of the culture of the other: must we, Jews, accept, approve the death penalty for apostasy, the genital mutilation of girls, the practice of stoning and punitive amputations, the status of dhimmi and all the rest of the Sharia? Isn't it rather for the Arabs to accept the Universal Charter of Human Rights?

- It puts on the same footing the contribution of the Jews and of the Arabs to humanity whereas if the Jews brought justice and freedom to the world by the 10 commandments, the Arabs imposed a brutal and unjust submission wherever they conquered.

It is a good thing to establish relations with our neighbors, but it cannot be done at the expense of truth and in confusion.
Our history, of us Jews who suffered under the totalitarian rule imposed by conquering Islam, must not be erased in irrelevant and obsequious bows.
The aim of our center / museum / memorial project is to make known the historical truth and not to lie for "diplomacy".
This MOU bodes badly for the continuation of events: if we start thus by leaving aside the truth, where are we going?
That is why, having researched and reflected for several years on the project for a center dedicated in Jerusalem to the history and culture of jews from muslim countries, we should be involved in the major decisions that will be taken from now on.

Our project has been taken over abusively by two individuals which offered to help and instead left us out of the loop entirely.
This is a recioe for disaster.

This is not our Project, the one which has been recommended in June 2011 by the National Council of Security in Jerusalem to Prime Minister Netanyahu, initiated by all Heads of Jews from Arab Countries in Israel - to be build in Jerusalem, to tell about the History of the Jewish Refugees from arab countries. Levana Zamir, Israel