To mark the 30 November Day of Commemoration of the exodus of Jewish refugees from Arab countries and Iran, Gilad Erdan, Israel's UN ambassador, pledged to press for a UN resolution for the recognition and compensation of Jewish refugees. 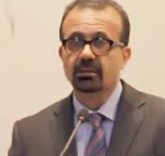 Enter Joseph Massad into the fray to call out 'Israel's outrageous fabrications'. Massad is Associate Professor of Arab Politics at Columbia University. Erdan's campaign, he alleges in Middle East Eye, is designed to exonerate Israel from the 'original sin'  of expelling the Palestinians and other 'criminal actions'.

Dismissing all  the ''push' factors, he argues that Jews coming to the Jewish homeland  cannot possibly be refugees. They can't be said to have been expelled either, because Yemen defied an Arab League ban  and 'allowed' the Jews to leave.  Israel 'removed'  'Arab Jews', as he calls them, to face institutionalised Ashkenazi discrimination in Israel' and the abduction of hundreds of children'. Massad obviously knows better than three Israeli Commissions of Inquiry, who could find no evidence of an abduction racket.

Ignoring the mass violence and state-sanctioned persecution confronting 'Arab Jews',  Massad resurrects the old chestnuts favoured by Palestinian propagandists of the 1950 'Mossad' bombs in Iraq and the 1954 Lavon Affair bombings in Egypt to infer that Jews had to be made to leave 'the  paradise 'of Arab countries by the Zionists. Then comes a curious inference : because most Jews in Egypt  did not have Egyptian nationality, one could not blame Egypt for expelling them as foreigners. In other words, Jews in Egypt were a mini-settler colony. It does not cross Massad's mind that Jews in Egypt could have been denied Egyptian nationality by racist laws. Of 1,000 Jews detained by Nasser after the Suez crisis of 1956, only half were of Egyptian nationality. (A negligible number, so that's alright then.)

Calling mainly on sources such as Tom Segev's The First Israelis, articles in Haaretz, Joel Beinin's The dispersion of tEgyptian Jewry and writings by Ella Shohat,  Massad passes over  massive evidence that Jews were stripped of their rights as Jews . He claims that there was no population swap between Jewish refugees and Palestinians, as Israel argues : while Jews were given Palestinian homes and land, Palestinians were not given Jewish property in return  (Not true: some Palestinians in Lebanon, Syria and Iraq were housed in Jewish property, and it was Arab League policy neither  to complete the exchange, nor resettle the refugees - ed). Massad inflates Palestinian losses to $300 bn, so that they dwarf Jewish losses.

According to Massad  the PLO got wise to Israel's trickery and all the Arab countries issued invitations for the'Arab Jews' to return in the 1970s. Massad does not provide any explanation for why they did not go back, choosing to stay and 'face  Ashkenazi discrimination'.

Curiously,  Arab governments can dodge their responsibility for what happened to their Jews because they are no longer in power, whereas an Israeli government which expelled the Palestinians is still in power. Hmmm.

Jews in Lebanon were never spoliated of their properties. .
Any jew owning assets in the Lebanon was free to keep them , sell them and freely dispose of the proceeds. Until today.
No jew was forced to do anything he did not want, in the Lebanon.
This is not the case for Syria, Iraq, Egypt etc....

That is not correct. During the 1948 Invasion of Israel by Arab Countries, Lebanese Jews were required to pay a war tax to the Lebanese Government to be to kill Jews in Israel. Even today, while a magnificent synagogue has been rebuilt in Beirut, no Jew would/could go there.