Calls for Mizrahim to 'build bridges' should be reciprocal

To mark 'Jewish refugee Day' -  the 30th November commemoration of the exodus of Jewish refugees from Arab countries - an important discussion took place on line between Ariella Cotler-Wunch, Knesset MP, Ellie Cohanim, assistant to Elan Carr, antisemitismtTsar, Hen Mazzig, Mizrahi spokesman  and advocate, Seth Frantzman, Middle East commentator and Sarah Levin, JIMENA executive director. The event concluded that Mizrahim were uniquely placed to 'build bridges' with the Arab world. While the Arabraham Accords do indeed mark a momentous opportunity for dialogue, the onus is equally on the Arab and Muslim world to 'build bridges' based on recognition of their  responsibilty for the expulsion of their Jewish citizens. 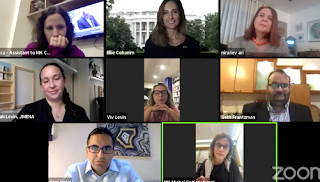 Israel Kastnett in JNS News:
With just the clothes on their backs and a few belongings hurriedly thrown into a sack, thousands of Jewish families were forced to flee from their homes after the declaration of the Jewish state on May 14, 1948.
This week marks the anniversary of this demographic shift and human tragedy. In 2014, the Knesset adopted a law that designates Nov. 30 as an annual, national day of commemoration for the 850,000 Middle East and North African Jewish refugees who were expelled from Muslim and Arab countries more than 70 years ago.
Israeli parliamentarian Knesset member Michal Cotler-Wunsh of the Blue and White Party hosted an online conference on Monday that brought together a group of activists to share their experiences and thoughts on how to further the cause of these refugees and their descendants.
A common thread among all of the speakers was that Mizrahi Jews—both the refugees and their descendants—can play a particular role in furthering Israel’s relationship with Arab and Muslim countries.
Read article in full
Tabby Refael writing in Jewish Journal:
Like Cotler-Wulsh, Cohanim praised the Abraham Accords and emerging opportunities for education and dialogue between Arab states and the West. In October, the State Department signed a Memorandum of Understanding with Bahrain’s King Hamad Global Centre for Peaceful Coexistence to “eradicate anti-Semitism and promote respect and peaceful coexistence between Arab and Jewish people through education and programs.”
Cohanim, who works with Elan Carr, Special Envoy to Combat Anti-Semitism, said she saw firsthand the power of Mizrahi Jews in Arab diplomacy during Israel’s recent outreach to Bahrain. “We have a cultural understanding,” she said. “We have so much in common; we understand each other and it’s really been like cousins getting reunited after a forced exile.”
Read article in full
Seth Frantzman in the Jerusalem Post:
Cotler-Wunsh also stressed the importance of people-to-people connections in the region, stating that she will soon propose a bill in Israel’s parliament that will ensure that every child in the Jewish state will learn Arabic. The work on partnering with like-minded people in the UAE is a welcome new initiative, said Hassan-Nahoum.
“It’s a great opportunity and I think to look at a joint future for the region, it’s important to celebrate the commonalities of our past, and we have a lot of years of good relations with our Muslim cousins, ultimately I think it is coming full circle, and we need to learn how to find the things that unite us.” Mizrahi heritage a key to that. Her family came from Morocco and has origins in Spain. Her husband’s family is from Iraq.
“My philosophy is that Mizrahi Jews need to take a more active role in peace building because we have a similar culture and our stories show we are indigenous to this region and land,” she said.
The supporters of this initiative of bridge building with Mizrahi heritage as a cornerstone hope to see the first fruits of their work soon with a unique event in the UAE that will bring together Arabs and Jews with Mizrahi Jewish heritage as a part of the bridge to peace.
Read article in full
Posted by bataween at Friday, December 04, 2020