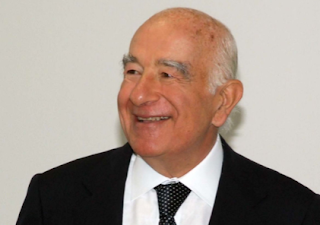 Joseph Safra z"l
Born in Beirut, he was in his 20s when he and his brothers Elie, Edmond and Moïse fled persecution in Lebanon and continued to develop the Safra banking group, set up by their father Jacob,  in Brazil.
Like his brothers, Joseph was deeply involved in Jewish community affairs in Brazi and internationally, spending a great deal of his time and fortune funding health, education and charity projects and paying for the construction of synagogues and community centers.
Both Joseph and Moise funded the construction of the largest synagogue in Brazil, an ornate structure serving Saõ Paulo's Sephardic Jews, and the restoration of the country's first synagogue, in the northeastern city of Recife.
In the 19th century the Safra family banked the Ottoman empire's caravan trade between Aleppo in Syria, Alexandria in Egypt and Constantinople.
Joseph Safra is survived by his wife Vicky, four children and 13 grandchildren.
Posted by bataween at Saturday, December 12, 2020