Arabs should acknowledge 'ethnic cleansing' of their Jews

How much does the average Palestinian know about the Jewish refugees from Arab countries? Very little. It would help create understanding if more  Arabs were aware of the 'ethnic cleansing' of their Jews.  Not many Americans would have heard about them either. Clifford D May tries to remedy the situation in the Washington Times: 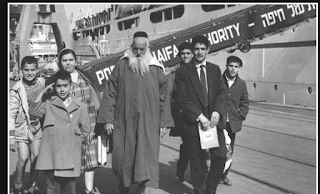 Jewish refugees arriving by ship in Israel
Nov. 30 is the day Israel designates for commemorating the 850,000 Jews who fled from Arab countries and Iran following World War II.
This year, like every year, the governments now ruling those lands did not mark the occasion. For what it’s worth, I’m going to do so here.About 80% of Israelis are Jews.
A significant minority of Israelis, close to 20%, are Arabs (or Palestinians — they may identify as they like). Most Israeli Jews are not from families that migrated from the Middle East to Europe centuries ago.
Most are Mizrahim, Jews who have lived for thousands of years among Arabs, Persians and other Middle Eastern and North African peoples.
The late Charles Krauthammer observed that Israel is the only nation on earth that inhabits the same land, bears the same name, speaks the same language, and worships the same God that it did 3,000 years ago.
But imperialist invasions and occupations against which the Jews fought led to the dispersal of Jews to lands across the region where they were ruled by a long list of conquerors until, in the 20th century, most became subjects of the nation-states created following the collapse of the Ottoman Empire.
Read article in full
Reprinted in The Algemeiner
Posted by bataween at Wednesday, December 09, 2020