Amid looting, Tunisia struggles to preserve 'its' Jewish heritage

While looting, vandalism and smuggling are to be deplored, this article syndicated by Associated Press assumes that Jewish heritage abandoned in North Africa belongs to the countries concerned and not to the Jewish community driven into exile. While the best one can hope for is that immoveable communal property, such as synagogues and cemeteries, be preserved, for Arab states to be entitled to claim moveable Jewish artefacts as their national heritage is simply to legitimise theft. To this effect, a campaign by JIMENA  seeks to prevent these states signing Memoranda of Understanding (MOUs) with the US has been underway.
TUNIS, Tunisia (AFP) –Tunisia is struggling to protect North Africa’s Jewish heritage, threatened by vandalism, looting and the smuggling of valuable artifacts bearing witness to the long history of the region’s Jews.
While many of Tunisia’s own synagogues and Jewish graveyards lie neglected, the country has also become a conduit for antiques pillaged in lawless neighboring Libya.
“A huge number of antiques have been looted in Libya, and people are trying to smuggle them to Europe,” said Habib Kazdaghli, a historian at Tunisia’s Manouba University.
Kazdaghli is campaigning for the creation of a museum of the country’s Jewish heritage — a sensitive subject given public opposition to Israel. In October, the Interior Ministry said it had confiscated two 10-meter (33-foot) scrolls in the coastal city of Nabeul, along with five small books in Hebrew. In 2017, police seized a 15th-century handwritten copy of all five books of the Torah, on 37 meters of bull skin. 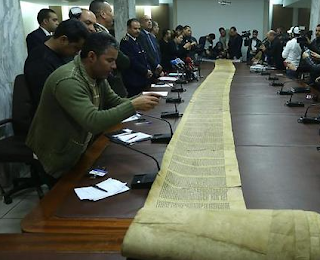 'Smuggled' Torah scroll seized by Tunisian authorities in 2017
The ministry described the item as “unique in the world” and said unnamed foreign buyers had attempted to obtain it. In another raid in January, the police said they had seized six Hebrew documents that smugglers admitted they were hoping to sell for 1.5 million dinars ($556,000).Tunisian authorities said a specialist network of antique smugglers had stolen the items from Libyan museums. 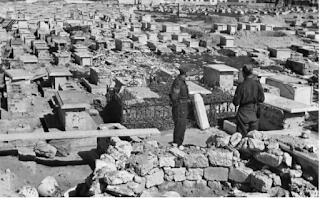 Allied soldiers survey the destruction at a Jewish cemetery on the coast of Libya, just west of Tripoli, on March 23, 1943. Many of the gravestones were used by Nazis to build defenses along the coast as the 8th Army advanced toward the city. (AP Photo)
“Can you believe someone would steal the word of God and sell it?” asked Perez Traboulsi, a prominent elder of Tunisia’s Jewish community.
Souad Toumi, an expert on Jewish heritage at Tunisia’s national Bardo museum, said she had recorded “dozens of stolen Hebrew artifacts that turned out to be important and rare.
”Many of them are old manuscripts, often meticulously written, sometimes in gold ink and stitched together with thread made from sheep or ox intestines. The subjects include religious songs and prayers, rulings, geometric decoration, plant and animal decoration, diagrams of human bodies and constellations, Toumi said.
Read article in full

Jews of Africa, Arab States and Europe..listen o Listen to the Word of the L-D and go up to Israel...where you can live as Jews....