Yisrael Yeshayahu, an architect of the Wings of Eagles airlift

If it were not for Yisrael Yeshayahu, Jews from Yemen' and Aden' might never have been airlifted to Israel, or might have arrived much later and in smaller numbers. Yeshayahu, who later became speaker of the Knesset, put constant pressure on the Histadrut (the Israel trade union federation) and Mapai ( Labour party). Sephardi Ideas Monthly showcases research by Daniel Gladstone into Yeshayahu's contribution: 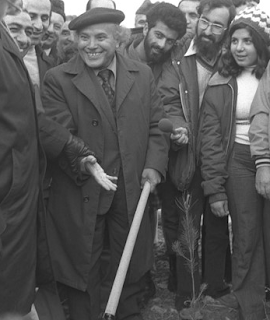 Yeshayahu plants a tree outside the Knesset building in 1976
Yemen today is in tatters, torn asunder by war and famine. The Yemen in which Yesh’ayahu came of age was comparatively stable and ruled by a single ruler: the Zaydi Imam Yahya.
Yahya reinstated the dreaded “Orphans Decree,” which permitted the kidnapping and forcible conversion to Islam of any minor Jews whose fathers had passed away. While the decree was only sporadically enforced, it loomed ominously over the entire community. Yesh’ayahu helped to smuggle Jewish children out of the country to protect them from forced conversion.
In 1929, Yesh’ayahu made ‘aliyah, arriving in a Land of Israel that was still under British dominion. He rose to a place of significance in the Histadrut, the union that, under the leadership of David Ben-Gurion, was one of the most important institutions of pre-state Zionist society.
His initial achievement, however, was due in large part to the more grassroots, radical activism of the Yemeni Union, a Yemeni lobby first established in 1920 with which Yesh’ayahu briefly affiliated before he became one of its leading opponents. The Yemeni Union competed with the Histadrut for Yemeni Jewish membership, charging the leading institutions of the Yishuv with neglecting and discriminating against Yemeni Jews.
The Histadrut responded by tapping Yesh’ayahu to lead its Department for Sephardim and Yemenis, established primarily to compete with and discredit the Yemeni Union. Indeed, Yesh’ayahu campaigned fiercely against the Yemeni Union and against Zachariah Gluska, who represented the Union in Israel's first Knesset (parliament) in 1948, although Yesh’ayahu later mourned Gluska’s passing.
The two men were enemies, and Gluska surely considered Yesh’ayahu a traitor to Yemeni Jews. But Yesh’ayahu may have known that, ultimately, any good that he was able to do—for the Yemeni Jewish community and for Israel—would never have been possible if not for the Yemeni Union’s demands for radical change.
Read article in full
Posted by bataween at Tuesday, November 24, 2020